Liverpool, along the Mersey Riverside

This is really a combination of tidbits from late Friday afternoon, through early Sunday morning before catching our train out-of-town – but look who is getting technical…

While our weather was somewhat decent we got out and covered a lot of ground, seeing some of the sites that we had not gotten to.

Friday – after our Beatles tour finished up, our driver dropped us off at Albert Dock so we could check out the Maritime and Slavery Museum.

The International Slavery Museum is housed inside the Maritime Museum.  It highlights the history of the slave trade triangle with ships being loaded with goods to trade sailing from England to Africa.  Goods were exchanged for human slaves which were then shipped off to Brazil, the Caribbean and Southern USA. Cotton, tobacco and other goods were then loaded onto the same ships and sent back to England and other North European ports, completing the triangle.

“For more than 2,000 years people in many different parts of the world have forced their fellow humans into slavery. Between about 1500 and 1900, Europeans forcibly uprooted millions of people from throughout West Africa and West Central Africa and shipped them across the Atlantic in conditions of great cruelty. To refer to the Africans who were enslaved only as ‘slaves’ strips them of their identity. They were, for instance, farmers, merchants, priests, soldiers, goldsmiths and musicians. They were husbands and wives, fathers and mothers, sons and daughters. They could be Yoruba, Igbo, Akan or Kongolese.

European slavers dispersed them across the Americas to lead lives of degradation and brutality, without thought for their personal lives. Millions died in the process. As a result, people of African descent are spread throughout the Americas and Western Europe. This is called the African Diaspora.” ~ Liverpoolmuseums.org.uk

The Merseyside Marine Museum showcases the history of immigration, and the link that Liverpool has to the sea, including the Titanic and other naval tragedies .

Saturday – I was curious to see the interior of this modern looking Catholic Cathedral. The Metropolitan Cathedral of Christ the King Liverpool is the official name.

What a story of vastly different architectural styles!  Lutyens Crypt is the foundation which was designed in 1930 for a traditional cathedral, arched brick.  No photography was allowed in the crypt, including the treasury room.

The main cathedral itself is completely the opposite; round, modern, open air with brilliant colorful light filling the room from the numerous bright glass windows in the ceiling. 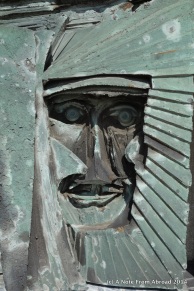 Outside at entrance to the Metropolitan Cathedral 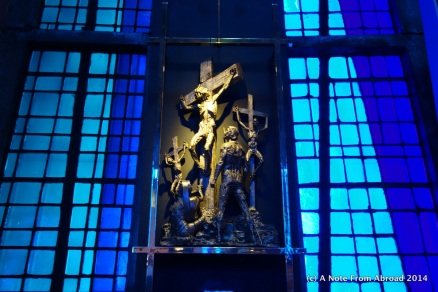 One of the stations of the cross

Another place listed high on the must see list was the Central Library; another story of contrasts. The outside of the building is classic design and consistent with the surrounding area. The inside has recently undergone a massive renovation and one can’t help but be reminded of the magical moving staircases that were showcased in the Harry Potter movies. 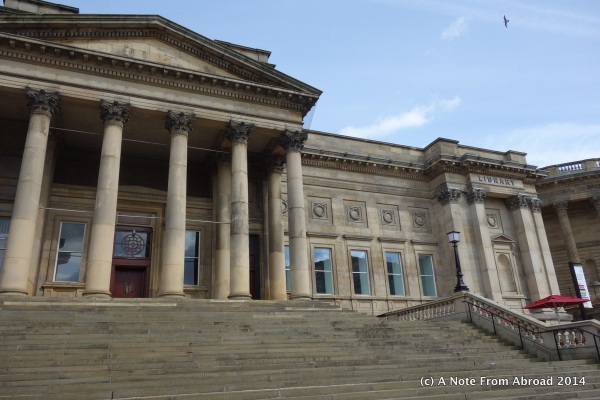 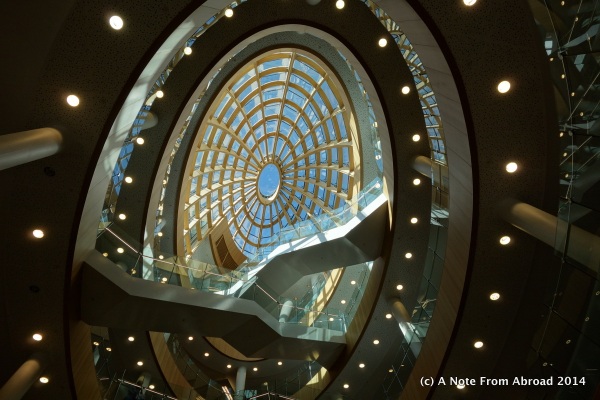 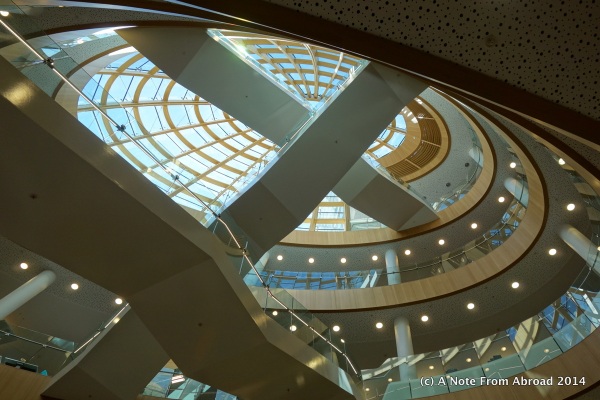 Make sure you check out the Hornby Library, Oak Room and Picton Reading Room while you are there.

Walk to the center of the Picton Reading room and listen for sounds.  The acoustics will amaze you.  There is a hidden door in the center pillar.  Perhaps you will get lucky and someone will show it to you…

And where was Tim most excited to go? Strangely – to see what a Costco was like here.

It turned out that this store could have been plunked down in Los Angeles and we would have never known we were in England.  Same products, similar layout, even some of the clothing was the same.  One item they had that we had not seen yet in the USA is a huge 90″ 3D LED Sharp TV.

Sunday – After checking out of our hotel, picking up our train tickets, and leaving our luggage at the baggage storage office, we walked two blocks to see the World Museum. 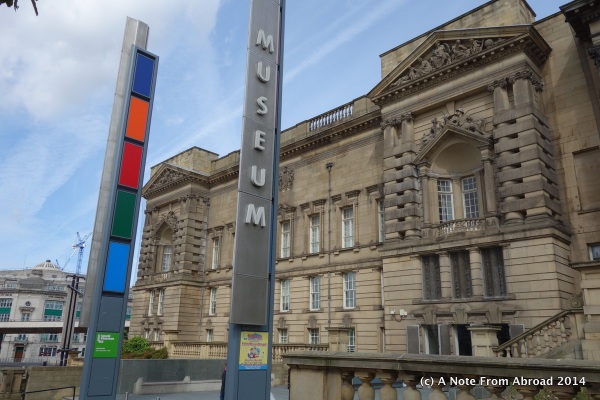 With limited time remaining and five floors to explore, we concentrated on only two of them, the bug exhibit and the aquarium area.  And then, just as quickly as it arrived, our time in Liverpool came to an end.

And as one adventure is completed, another one begins as we board the train heading toward YORK…

Gratitude Moment: Today I am grateful for the abolishment of slavery.  That being said, there are still too many people all over this planet that are being enslaved, kept in abject poverty, taken advantage of, used and abused.  I pray that we, as a human race will continue to evolve and grow into a kinder, better society where every person is truly free.

Hi and welcome! We are Tim and Joanne Joseph and we have just embarked on our latest adventure. We hope you will join us!
View all posts by Tim and Joanne Joseph →
This entry was posted in England, Europe and tagged England, Library, Liverpool, Merseyside Maritime Museum, Metropolitan Cathedral, Photography, Slavery Museum, Travel, World Museum. Bookmark the permalink.

2 Responses to Liverpool ~ Contrasts and Contradictions