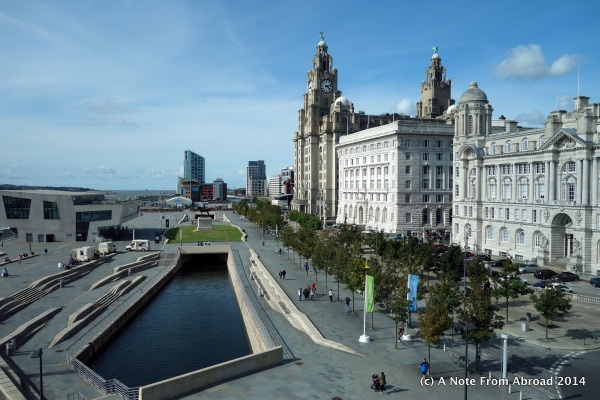 Our friends Dick and Karen recommended that we check out Liverpool – so, here we are… Once again I find myself in unresearched territory.  I only know that this is home to the Fab Four – The Beatles!

Being a child of the 60’s I can still remember the day as if it was yesterday when they made their US debut on the Ed Sullivan Show.  Mr. Sullivan starting out the evening with his announcement that “Tonight we have a really big shoe”.  At least it always sounded like he was saying shoe instead of show to me.

When those four came on stage with their mop topped hair cuts, tight pants and thick accented singing style, every teen-aged girl in America and the rest of the world fell in love with them.  We each had our favorite.  Mine was the quieter, soft-spoken George.

On Friday we have booked a two-hour taxi Beatles tour that is to show us where they lived, performed and other places they left their imprint growing up here.

But in the meantime, I’m getting introduced to the fact that Liverpool is a beautiful city in its own right.  By now you know that taking the Hop-on Hop-off bus in most cities upon arrival is our habit, and this was no exception.

Modestly priced here, compared to other cities, the one hour route is priced at £6 ($10) each for students and seniors.  The driver kindly called me a student and I was immediately in love with him.

We did the complete loop first so that we could get our bearings.  On the second time around, we stayed on past the Catholic Cathedral, but may go back to check it out in the future, time permitting as the modern interior with multiple colored glass dome is of interest to me.  Nicknamed locally Paddy’s Wigwam. 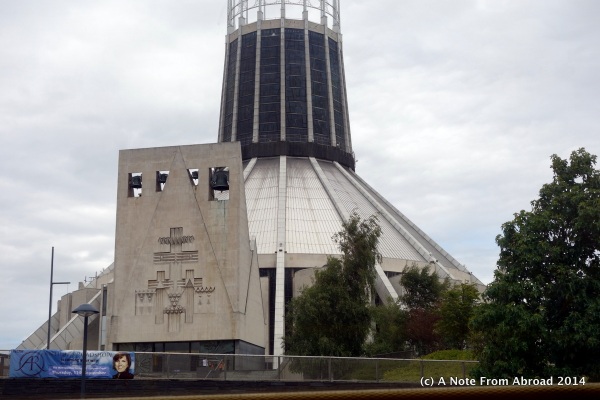 We did get a chuckle that the four bells in front are named after the Four Apostles, Saints John, Peter, Mark and Paul, but the locals call the bells after their most famous citizens, John, Paul, George and Ringo. 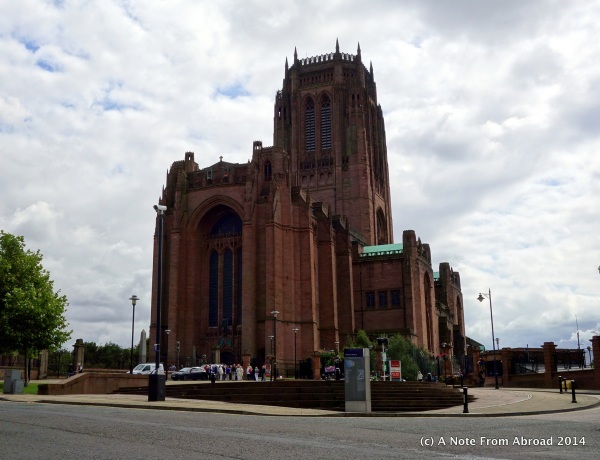 We opted to check out the larger Anglican Liverpool Cathedral.  This place is enormous and the pictures do not do justice to it.  I think my camera settings were off today and I was quite disappointed in my results. Still this may give you at least a bit of an idea as to its magnitude.

Taking 74 years to build and only being completed relatively recently in 1978, this is the largest cathedral in the UK and the fifth largest in the world! 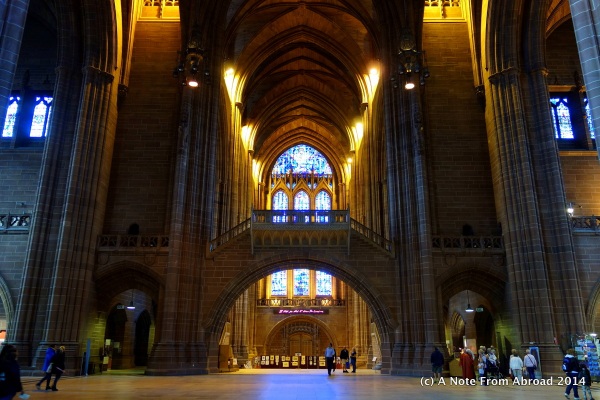 Interior of Cathedral with bridge way 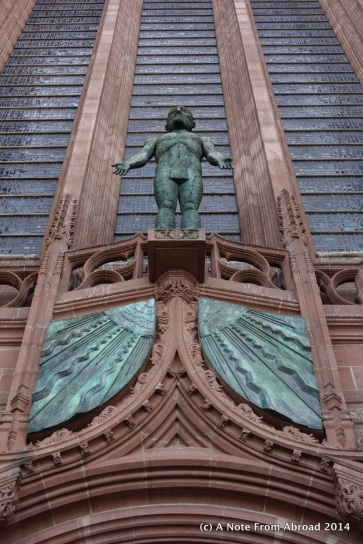 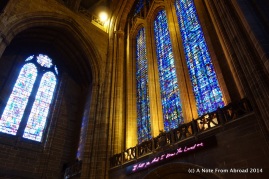 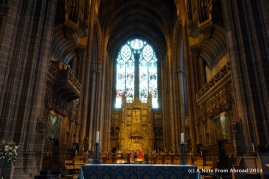 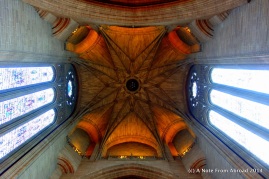 They have commercialized themselves complete with a gift shop.  And another first for me – eating inside a cathedral.  Yep, they have not just one, but two restaurants INSIDE of the church.  Since I had never experienced this before, of course we had to stay for lunch.  I love their tagline:

Close by, the multi span arch marks the entrance to the oldest Chinese settlement in Europe. 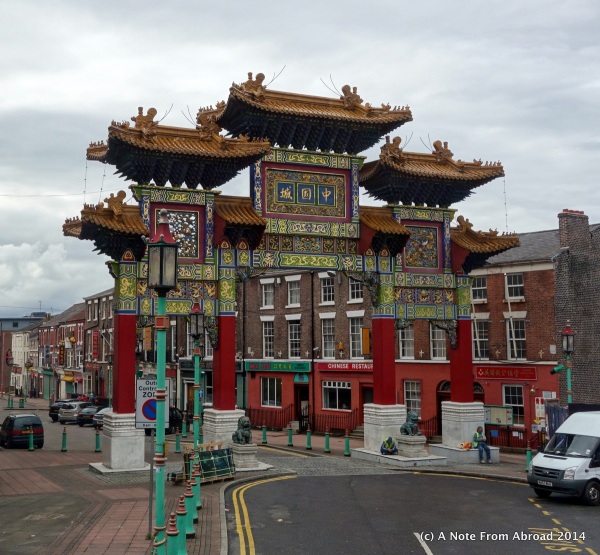 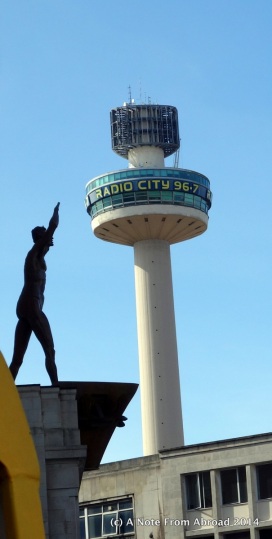 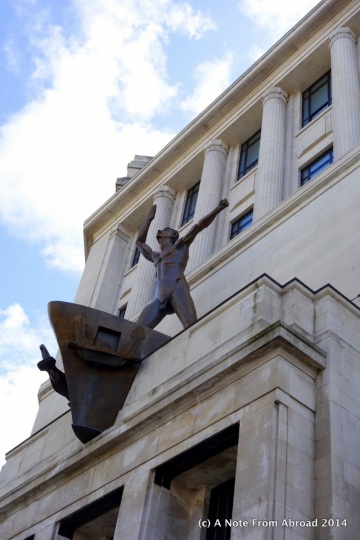 I still am not sure why, but the naked man sculpture on the side of the building our aparthotel is located in is a popular landmark and even mentioned on the city tour. Known as the Dickie Lewis statue, this building was once home to the flagship department stores under the Lewis’s name that was located here from 1856 to 1991.

I got a kick out of the grade school lad sitting in front of me on the bus that giggled as he grabbed his mother’s arm gleefully telling her, “look mummy, that man is naked”.

Continuing on down toward the waterfront we came to my favorite part (at least so far) of the city, Albert Dock.  A brilliant place to walk, eat, browse and explore. 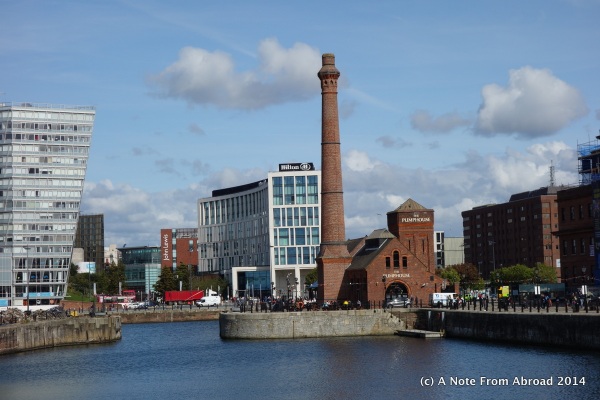 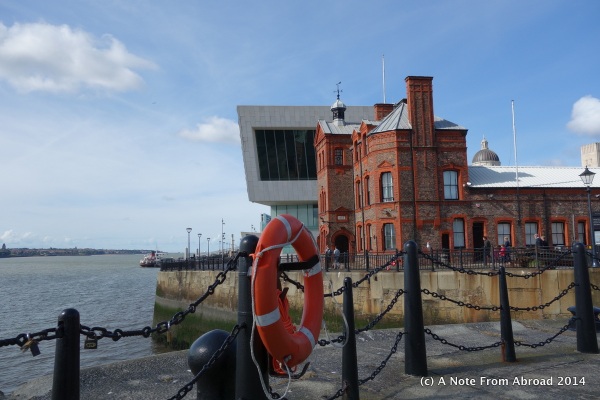 A song made famous by Gerry and the Pacemakers, Ferry Cross the Mersey, was a tribute to this river.  If you are not familiar with the song, or like me, enjoyed a trip down memory lane, you can click here to hear it. 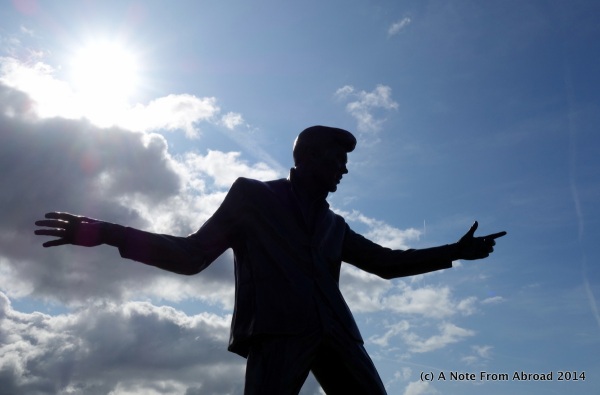 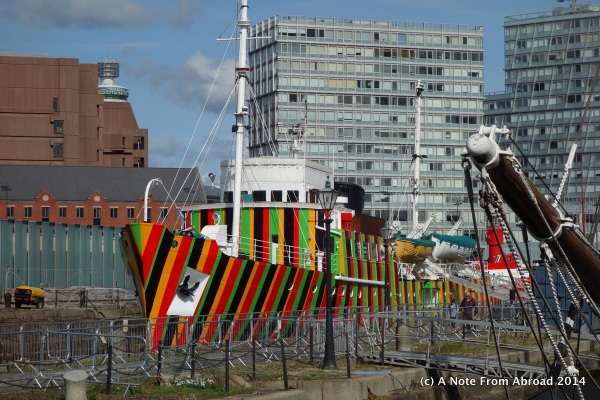 Dazzle ships go back to World War I.  Dazzle painting, using strong bold shapes and colors was intended to confuse the enemy, not to camouflage. 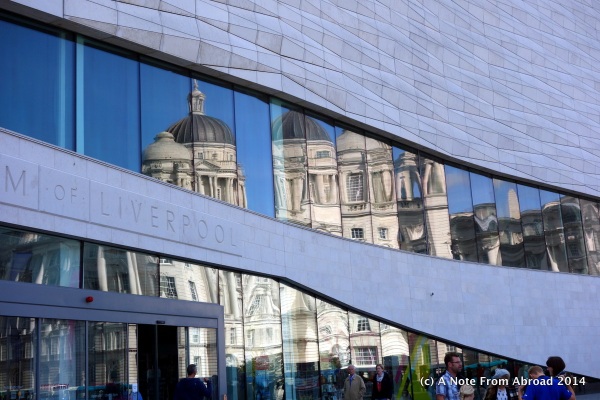 Entrance to Museum with reflections in the windows 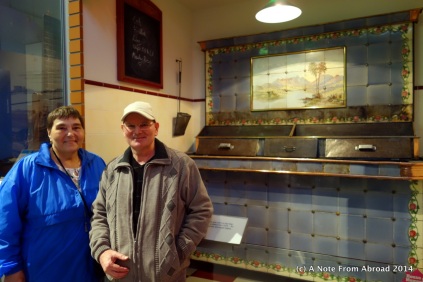 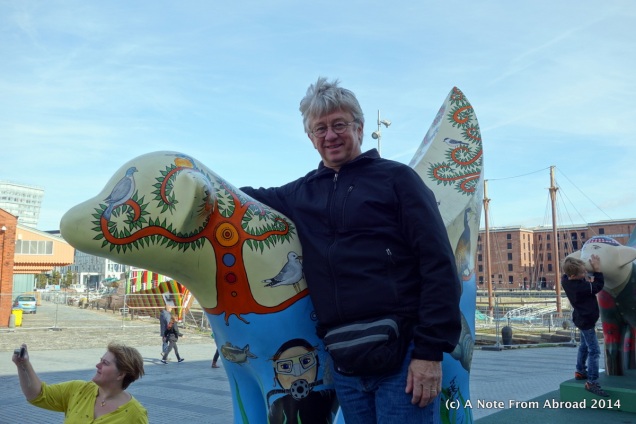 Met a lovely couple, Tony and Jackie, who were kind enough to explain what it was like running a fish and chips restaurant or “Chippy” as it is known locally.  They are pictured standing in front of a coal heated frying station.  Their place was so well-known that the likes of Margaret Thatcher and a former Prime Minister were both customers.

They gave me a few tips and questions to ask when ordering fish and chips:

I also enjoyed the April Ashley exhibit.  As the first British person outed as a transexual, she became an outspoken advocate for others. I found it interesting, well done and sensitive to the material.

Gratitude Moment:  Today I am grateful for new experiences; eating in a cathedral for the first time, walking along the Mersey river bank, learning more about fish and chips, and exploring a lovely new city.

Please join us – we love the company!

Hi and welcome! We are Tim and Joanne Joseph and we have just embarked on our "next chapter". At a stage in life where traveling the world, taking pictures, and sharing our adventures with friends and family will be our dream come true.
View all posts by Tim and Joanne Joseph →
This entry was posted in England, Europe and tagged Ed Sullivan, England, hop on hop off bus, Liverpool, Liverpool Cathedral, Liverpool Catholic Cathedral, Photography, The Beatles, Travel, UK. Bookmark the permalink.

10 Responses to The Four Apostles: John, Paul, George and Ringo