Dublin, Ireland ~ a few more things to see, do and where to eat 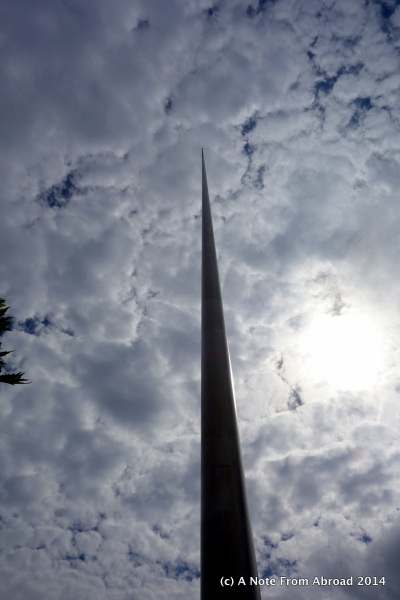 Spire of Dublin aka Monument of Light

The Spire of Dublin is the worlds tallest sculpture, located on O’Connell Street.

Our time in Dublin was fast coming to an end and we had still not done our normal routine – taking the Hop-on Hop-off bus for an overview and get us to some of the major sites we wanted to explore.

Since I am once again behind in my blogging, I will condense our two-day exploring into one or two favorite shots from each of the major attractions we visited.  I’ll also provide a link so you can get a little more information if you are interested. 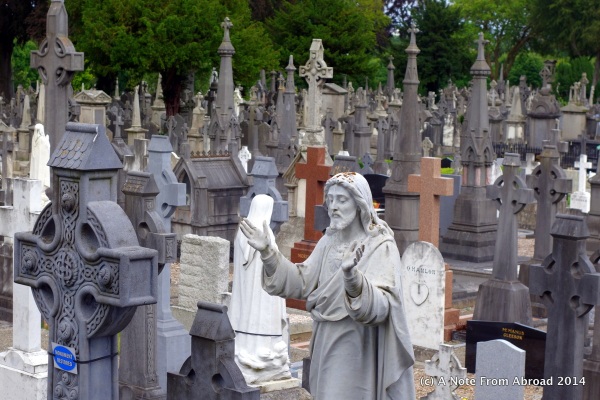 There are over 1.5 MILLION buried in Glasnevin Cemetery

I know it seems rather strange for a cemetery to be listed as a top tourist attraction in a city, but it certainly is in Dublin and comes complete with guided tours.  It is listed as #4 out of 279 things to do per Trip Advisor!  Tim and I took a private tour and gained admittance inside the largest monument in the cemetery – under the tower and inside the tomb of Daniel O’Connell.

O’Connell is much revered in Ireland.  A staunch advocate for resolving things peacefully and via legislation, he championed the Catholics in the late 1700’s, early 1800’s, who were treated as second class citizens in Ireland. 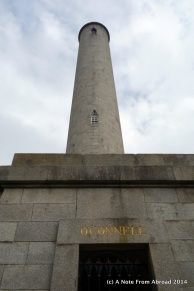 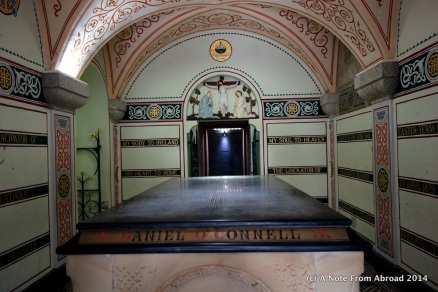 Under the monument – Inside the tomb

“Prior to the establishment of Glasnevin Cemetery, Irish Catholics had no cemeteries of their own in which to bury their dead…O’Connell pushed for the opening of a burial ground in which both Irish Catholics and Protestants could give their dead dignified burial.  Glasnevin Cemetery was consecrated and opened to the public for the first time on 21 February 1832.” ~ Wikipedia 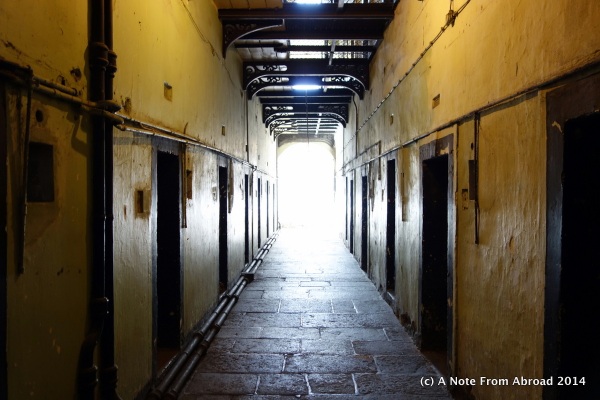 Coming in at #7 on the Trip Advisor list.  The only way to visit the old jail is via a guided tour.  During peak times, the tours book up hours in advance, so try to get there early in the day to avoid disappointment if this is on your “want to see” list.  The tour lasts an hour and covers much Irish history.  There is an attached museum and small snack bar available to browse through or get something to drink while waiting for your tour to begin.

As was common in the old jails during this time, the conditions were horrendous, overcrowding, and little food.  People were starving during the famine and would sometimes steal a few loaves of bread just to be arrested to that they could go to jail.  For some, having only a few bites of food daily while in jail was better than having no food at all.  Men, women and children were all jailed, often for minor crimes or political reasons. 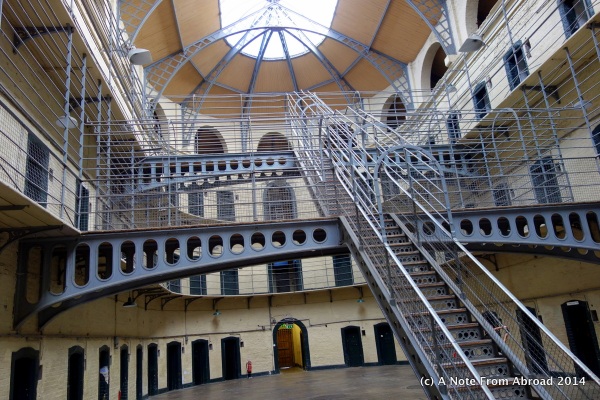 According to our guide, the youngest prisoner was only five years old (Wikipedia says the youngest was seven).  He was imprisoned for stealing a jewelry chain which he intended to trade for some food.

Ranked #8.  Free to the public, but a €5 donation is suggested.  Located on the grounds of the Dublin Castle, it won European Museum of the year in 2002.  Although no photography was allowed inside, this was one of my favorite places in all of Dublin.  Set up as a museum with a clever A – Z special exhibit that showcases the wide assortment of items Mr. Beatty collected over the years. 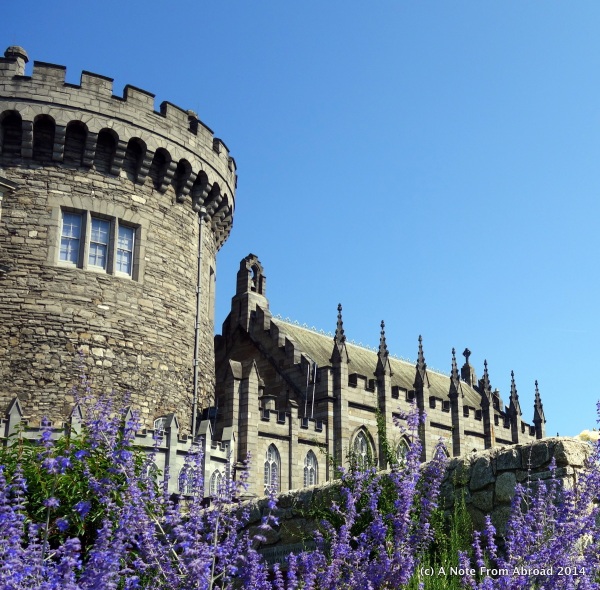 There is also an amazing section that displays extremely rare books he collected, especially from China and Japan, as well as Iran, Turkey, and Egypt.

We toured through Trinity College when we stopped here on our cruise a few weeks ago and saw the Book of Kells.  Here is my write-up from that visit.  I actually enjoyed seeing the Chester Beatty Library much more.

The largest church in Ireland, and one of two cathedrals just a few blocks apart.  One of the key members of the church was the writer Jonathan Swift.  He served as dean of the cathedral from 1713-1745.  He is also famous for writing the book Gulliver’s Travels.

“We have just enough religion to make us hate, but not enough to make us love each other” ~ Jonathan Swift

He was a strong advocate for the destitute and mentally ill. 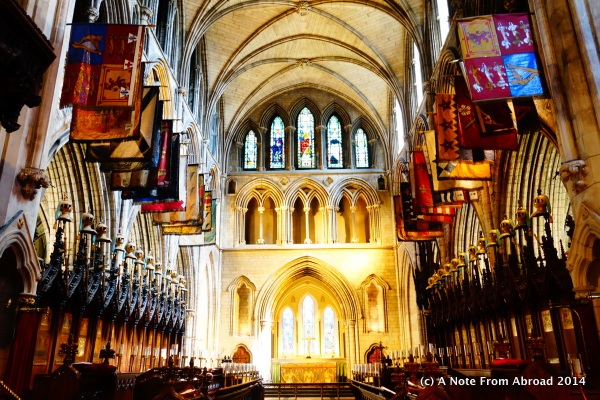 They had a memorial tree inside where anyone could write the name of a loved one, so I added a leaf with a remembrance for my parents and Tim’s father before we left. 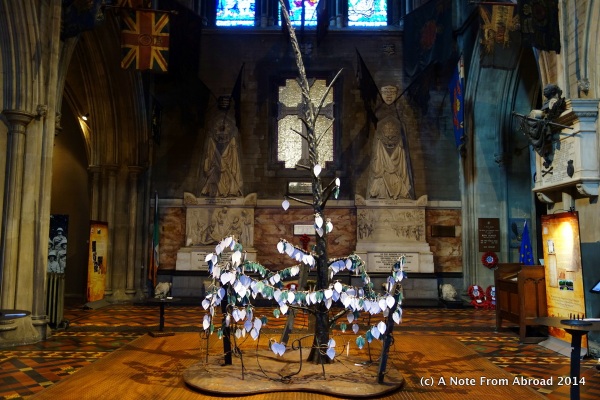 It is always both a challenge and an adventure finding places to eat in a new city.  Tim has a list of food items a mile long that he can not eat, or he will pay a painful price.  Traveling with any kind of food allergies or restrictions narrows our options.  To simplify it, he is allergic to free glutamic acid (MSG and processed food).  He can’t eat anything artificial, i.e. artificial sweeteners, ultra pasteurized, or over processed (heated to a high temperature).  That means we have to find healthy dishes, cooked from scratch that are made from whole ingredients.

Since we often split a meal, it makes it much easier if I am following the same plan.  Due to my brain tumor, I have chosen to try to eliminate all the artificial junk from my diet as well.  No GMO’s, organic as much as we can, and lots of fresh fruits and vegetables.  Since I don’t have the immediate painful physical reaction that he does, I can get by with “cheating” once in a while, but I’m getting better all the time.

Here are a few suggestions of places we found in Dublin that serve not only healthy foods, but really tasty meals that we thoroughly enjoyed.

Chopped – Choose from a large variety of ingredients for a fresh garden salad, then watch them chop it, add the dressing of your choice and deliver it to you in a take-away bowl.  A balsamic vinaigrette is usually safe for him.

KC Peaches – They have several locations, but the one we ate at several times was right across from Trinity College.  Make sure you go downstairs to the Wine Cave where they have an early bird special. You get two or three courses with a glass of wine for a reasonable price.  It was enough food for Tim and I to split.  Some of the best food we had while in Dublin.  If you go in, make sure to ask for Sarah.  She is a delight and will give you excellent service.

Silk Road Cafe – Located at the Chester Beatty Library, this is a hidden gem.  Combining a cooking school, catering business and a modern, bright cafe the food was impressive.  Middle Eastern and Mediterranean cuisine is their specialty.

Gratitude Moment:  Today I am grateful that there is a trend (albeit a small one) in the direction of eating fresh, unaltered foods.

Hi and welcome! We are Tim and Joanne Joseph and we have just embarked on our "next chapter". At a stage in life where traveling the world, taking pictures, and sharing our adventures with friends and family will be our dream come true.
View all posts by Tim and Joanne Joseph →
This entry was posted in Europe, Republic of Ireland and tagged Cemetery, Chester Beatty Library, Daniel O'Connell, Dublin, Gaol, Glasnevin, Jail, Kilmainham, Monument of Light, Photography, Republic of Ireland, Spire of Dublin, St Patrick's Cathedral, Travel, where to eat. Bookmark the permalink.

4 Responses to Dublin, Ireland ~ a few more things to see, do and where to eat