Rock of Cashel and Kissing the Blarney Stone

Tuesday July 15th ~ Touring through Ireland in Tipperary and Cork 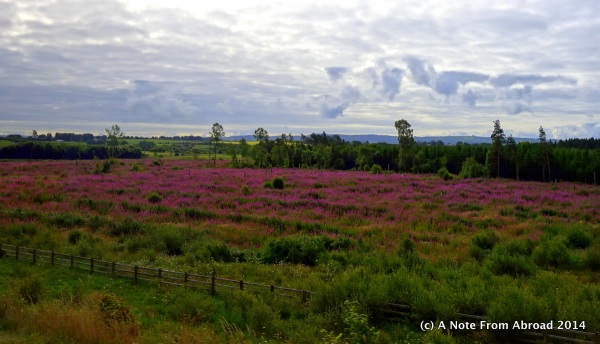 On our drive south toward Rock of Cashel, fields of wild flowers

What fascinates me the most is the amazing marketing campaign that has somehow managed to get a million people or more a year to travel 1000’s of miles, then wait in line for one to two hours, climb up narrow winding steep steps to the top of a rock building, put your life in the hands of a total stranger, bend over backwards, and then put your lips on a piece of stone covered by God only knows how many germs.  Well done Ireland!!!

And we, like all those others, are off today to do just that!

Our early morning started out with a brilliant blue sky, a warm sunny day and I had such high hopes. Within two hours, gray had set in again for the rest of the day.  The weather leprechauns are quite the tricksters.

Up early again for a 6:50 tour, this time to see the Rock of Cashel, Barney Castle and the city of Cork.  We used the same local tour company, Irish Day Tours, that took us to the Cliffs of Moher on Sunday.

We got off to a wee bit (do I sound Irish?) of a late start, as our tour guide/bus driver, Jim, evidently was assigned a bus he was not familiar with and could not figure out how to start it.

The online posted itinerary showed that we were supposed to go to Blarney Castle in the morning, have two hours in Cork and stop at the Rock of Cashel on our way back toward Dublin.  I think perhaps that might have been a better arrangement.

Left Dublin 10 minutes late.  Toilet stop had slow passengers evidently that can’t tell time that kept everyone waiting on the bus 10 minutes.  Stopped at the Rock of Cashel on the way, (had a couple different passengers that delayed us leaving by 15 minutes), then Blarney Castle (parking lot full of busses, and line to kiss the Blarney Stone took well over an hour, then more delays for over 20 minutes).  By the time we finally arrived in Cork, the promised two hours was reduced to only one hour.  That meant a quick late lunch and no time to really enjoy the city.

OK, enough about what went wrong.  Here is what I enjoyed tremendously.

This is reputedly the site of the conversion of Aenghus the King of Munster by St. Patrick in the 5th century AD.

Rock of Cashel sits high above the town

Located in the county of Tipperary, the Rock of Cashel is also known as Cashel of the Kings and St. Patrick’s Rock.  It is currently going through some preservation measures, so the oldest section including Cormac’s Chapel was covered in scaffolding.

“The oldest and tallest of the buildings is the well-preserved round tower (28 metres, or 90 feet), dating from c.1100….The complex is one of the most remarkable collections of Celtic art and medieval architecture to be found anywhere in Europe.” ~ Wikipedia

Here are some of the pictures we took while there: 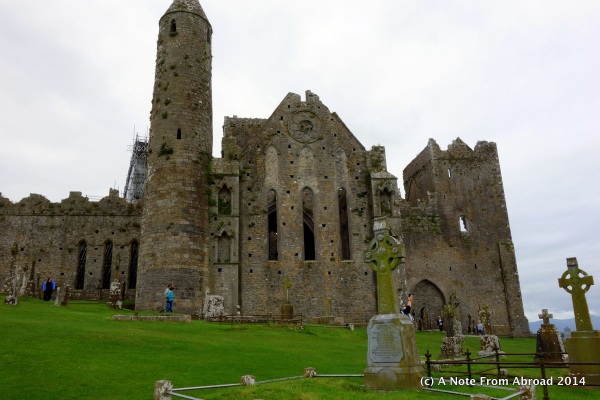 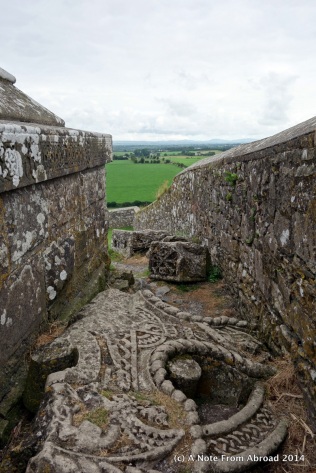 Another ruin in the field below 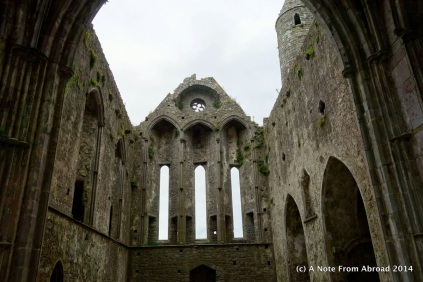 Mary with fields in the background

Design inside of choir house

“The castle is now a partial ruin with some accessible rooms and battlements. At the top of the castle lies the Stone of Eloquence, better known as the Blarney Stone. Tourists visiting Blarney Castle may hang upside-down over a sheer drop to kiss the stone, which is said to give the gift of eloquence.” ~ Wikipedia

“Blarney Castle, as viewed by the visitor today, is the third to have been erected on this site. The first building in the tenth century was a wooden structure. Around 1210 A.D. this was replaced by a stone structure which had the entrance some twenty feet above the ground on the north face. This building was demolished for foundations. In 1446 the third castle was built by Dermot McCarthy, King of Munster of which the keep still remains standing.” ~ Blarneycastle.ie

After seeing the parking lot filled with busses, we knew that long lines were facing us if we wanted to make it to the top and back down before we were scheduled to depart.  We made a beeline to get in line.

Blarney Castle from below

Standing below the main tower, looking up we could see the opening where far over our heads people were kissing the stone.

The line moves at a snail’s pace it seems, but high above we can watch one after another quickly get their turn to put their lips where thousands of other people have already kissed (and that is just today).  Howie Mandel would never survive this! 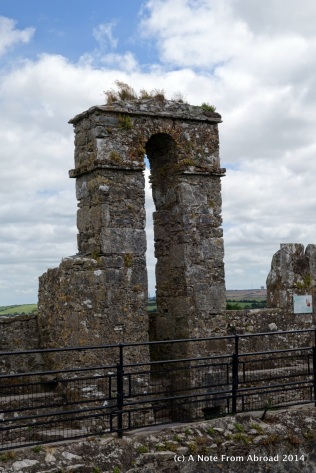 Side of the castle

Once inside the castle, we had a few things to look at and were entertained by a violinist playing Irish jigs.

The last part of the waiting was a bit more of a challenge as we threaded our way through very narrow rock passages, winding up steep and claustrophobic inducing stairways. Thankfully every little bit there was an opening that let in light and I could get a look outside.  Anyone with a weight issue might not easily fit through the last part of the passageway.

Finally!  Made it to the top where we could see others get their turn to “get the gift of gab”. 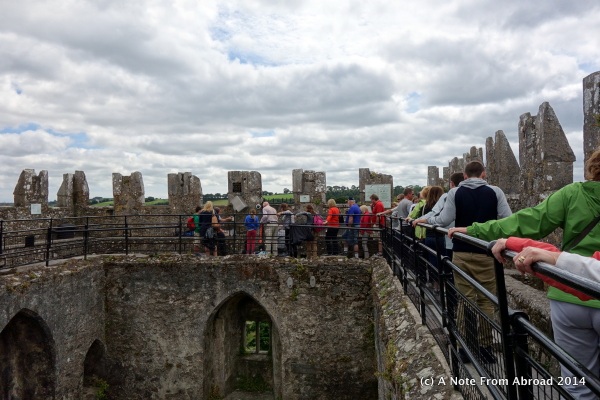 Finally made it to the top, still in one piece

Tim had not been keen on following this age-old tradition, but I insisted that we could not come to Ireland and not kiss the Blarney Stone, so he kindly went along with my whim. And here we are, finally both getting our turn: 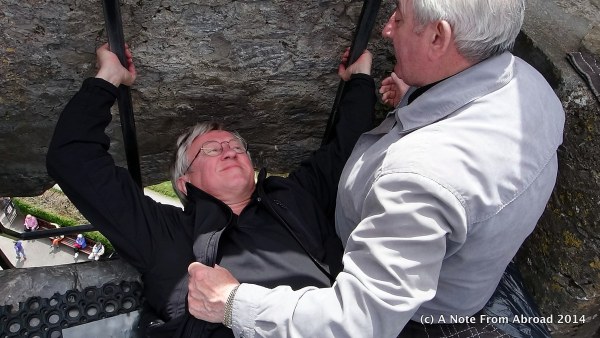 Our final stop of the day was for a quick lunch in Cork.  I would have enjoyed having a little more time there, but with the earlier delays, that was not to be. 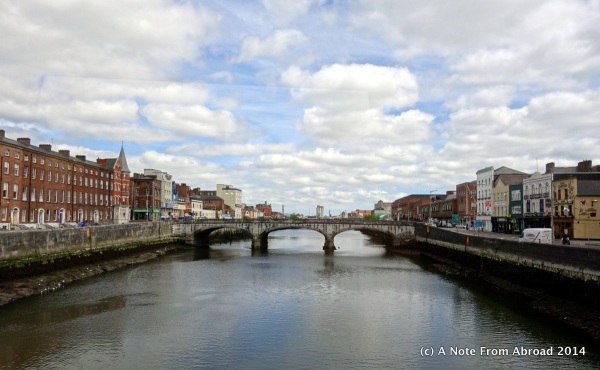 The Shannon River in the city of Cork

Gratitude Moment:  Today I am grateful for receiving good medical news from two different friends via Facebook messages (a surgery that was a complete success and continuing mobility improvement for another) and I’m awaiting test results on a third person, a friend from high school days that just had a lump removed.  Another medical story in progress involves a transplant.  He is now on day 10 of 100 during the critical post-transplant process.  Another friend is being referred to a heart specialist, and another trying to get medication leveled out while fighting depression.

My prayers are for all of these people and their families as they go through these challenges.

Hi and welcome! We are Tim and Joanne Joseph and we have just embarked on our latest adventure. We hope you will join us!
View all posts by Tim and Joanne Joseph →
This entry was posted in Europe, Republic of Ireland and tagged Blarney Castle, Blarney Stone, Cashel, Kissing the Blarney Stone, Photography, Republic of Ireland, Rock of Cashel, St Patrick, Travel. Bookmark the permalink.

10 Responses to Rock of Cashel and Kissing the Blarney Stone