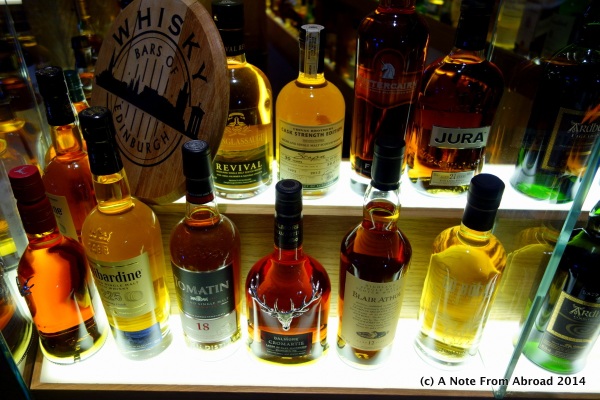 We anchor just off shore in the small port of Queensferry, located on the Firth of Forth, an arm of the North Sea. We are about a 45 minute drive away from our destination – Edinburgh, Scotland. Monday went like this:

Well, I might have left out a FEW details…

Scotland contains 30,405 square miles – about the size of Maine, and Edinburgh is the capital. Some immediate images that come to mind when I think of Scotland include bagpipes, kilts, the Loch Ness monster, Scotch, and a strong often clipped accent. They are part of the United Kingdom along with England, Wales and Northern Ireland. 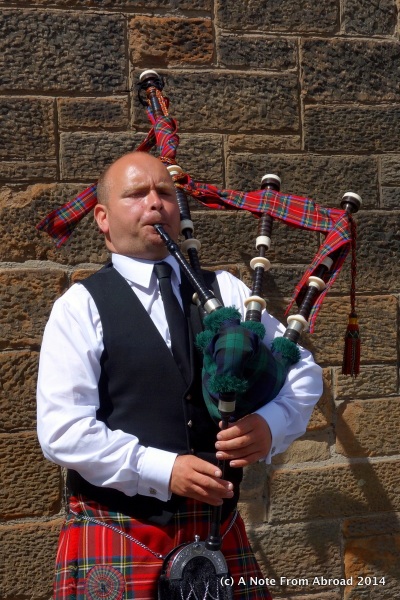 Getting off the tender at the Hawes Pier in South Queensferry we were greeted by representatives of the local tourist information bureau. What a help they are in providing maps, instructions on how to get to public transportation (bus or train, as well as taxi or tour busses), advise us what the must see attractions are, and hand out brochures on the mentioned sites. 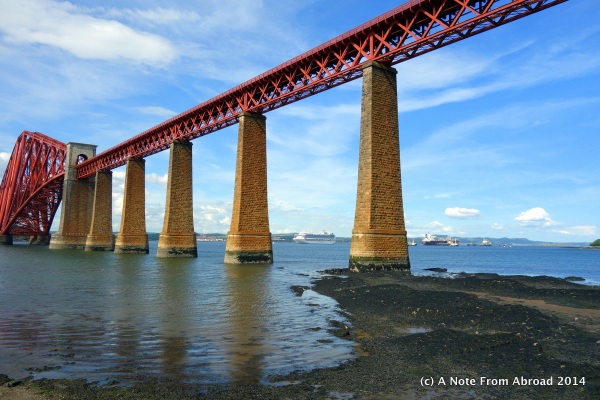 After getting directions, we walked about 10 minutes, mosty uphill, including some steep steps, to the Dalmeny train depot to take a 40 minute ride to Waverly station located in the center of Edinburgh. The train departs four times an hour during peak hours. Just FYI, for anyone with mobility issues, you might want to grab a taxi from the pier to the train depot.

The train ride itself was lovely and I am becoming more and more comfortable with using Europe’s excellent rail system. The scenery is lush with green rolling hills, more purple, yellow and white wild flowers. Some crops look almost ready to harvest.

Fields along the train ride

The hop-on hop-off bus has become our first go-to thing to get an introduction to most major cities. The bus pick up point was just a block away from where we got off the train. The entire loop on the sightseeing bus takes 55 minutes if you do not get off at any of the stops and it provides a wonderful overview of the city.

It was narrated in several different languages which you can listen to through provided earphones. You, of course, have the option of getting off at any of the dozen stops along the way if you want to check out any of the sites, monuments, churches, palaces, castles, museums, etc. You can get on and off as many times as you like while your ticket is valid. You can purchase either a 24 hour or 48 hour pass.

The city feels midevial with everything being made out of stone. Tim and I both felt that one day here is not nearly enough to even scratch the surface. We jointly decided to somehow incorporated a return visit to this area before returning to the states. It is another of those love-at-first-sight kind of cities. 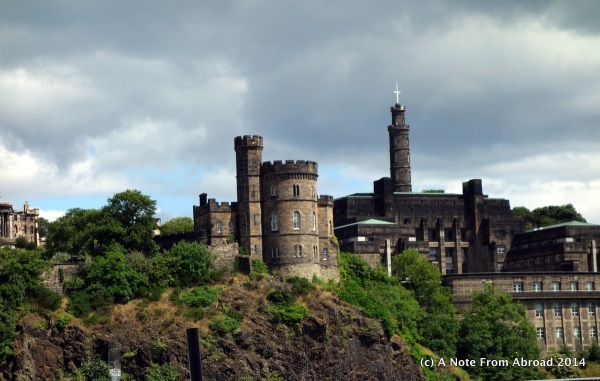 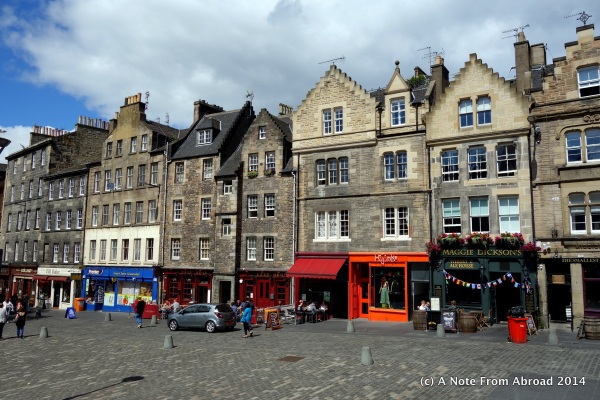 Along the Royal Mile 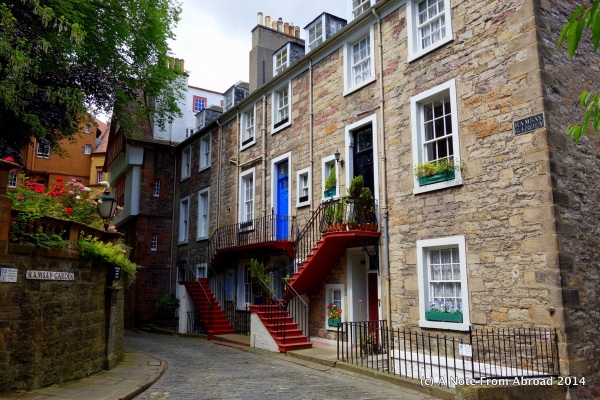 Houses made of stone with colorful doors

Main Street goes through the center of town and connects Edinbergh Castle at one end and Palace of Holyroodhouse at the other end. It is just over one mile in length and known locally at the “Royal Mile”. After our bus tour ends, we have lunch in a small but tasty restaurant called Amber. Amber refers to the color of Scotch which is on sale EVERYWHERE. 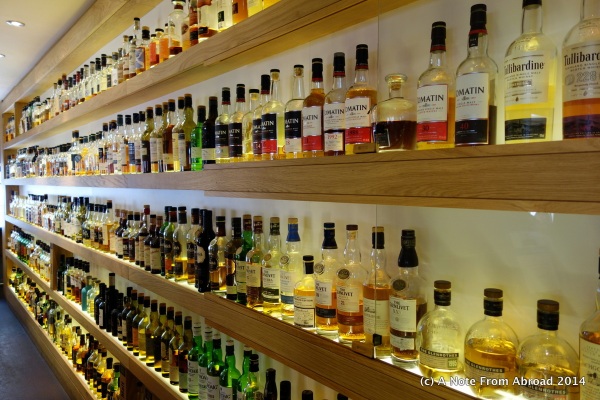 Row after row of Scotch Whiskey. I had no idea there were so many different kinds

Following our meal, we make our way on foot to the Edinburgh Castle. Sitting high above the city on volcanic rock, it is an imposing site. It is definitely larger and better preserved than many of the ancient castles we have seen throughout Europe. Most of the buildings are still being used today. 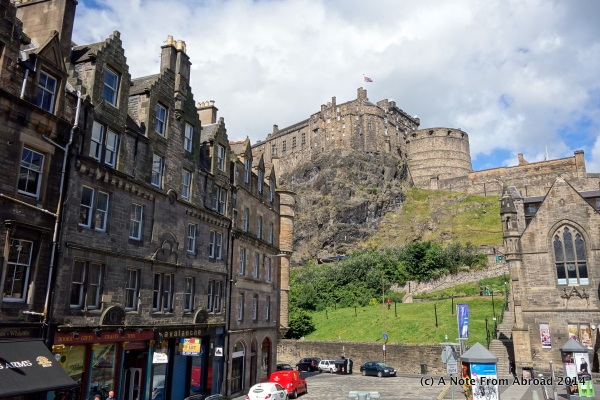 The English Heritage membership we purchased in Dover (the day we met the little shuffling man) has come in handy and has more that paid for itself. When we present the card in Scotland, they have a reciprocal agreement, and we get 1/2 off of our entrance fees. We also used it a couple of days ago in Kirkwall and saved 1/2 on the entrance to Earl’s Palace.

Approaching the entrance gate, we see all of the bleachers being set in place in preparation for the August Festival and the Military Tattoo.

Once inside, free tours are provided leaving every 20 minutes. There is a lot of history here besides the crown jewels and magnificent vistas of the city far below. 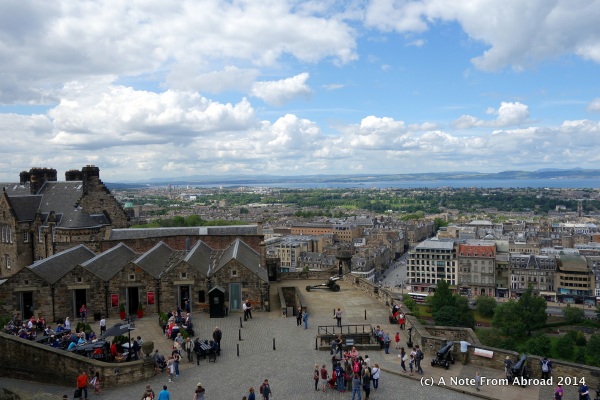 The garden outside of St. Margaret’s Chapel, the oldest building in Edinburgh, was just replanted and the Queen visited just last week for a dedication ceremony. 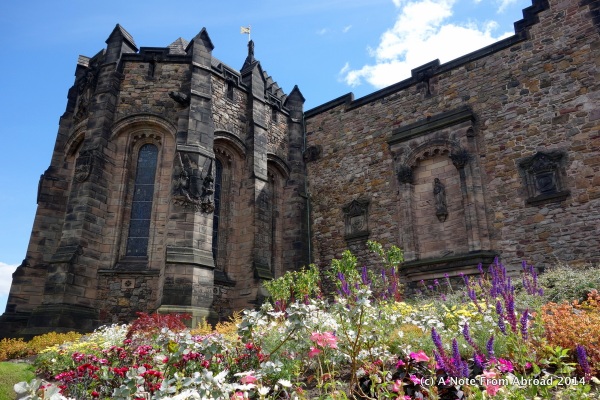 For me the highlight was our visit inside the Scottish War Memorial. Out of respect, no photography was allowed inside. The walls were lined with heavy bound books with years embossed on the face. In each volume were the names of the fallen military men and women dating from each war through WWI, WWII and to the present date. I found many fallen soldiers with the last name of Morton (my maiden name) and I could not help but wonder if they were related to me as I know I have some Scottish Heritage.

A large carved statue of Archangel Michael hangs from the ceiling high above.

Over the door was another statue – Cirque??? I have to do more research on this when I have a better online connection.  Embossed with gold and silver, flames at the base, and holding a broken sword. In the right hand the top of the sword forms a cross. In the left hand the broken shaft with the pointed end toward the ground symbolized a wish for no more wars and eternal peace.

We spent about an hour and a half inside the castle, but one could easily spend more time there. We only saw a portion of the buildings. 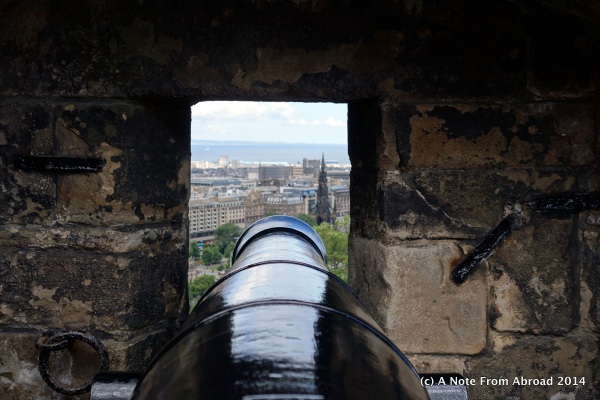 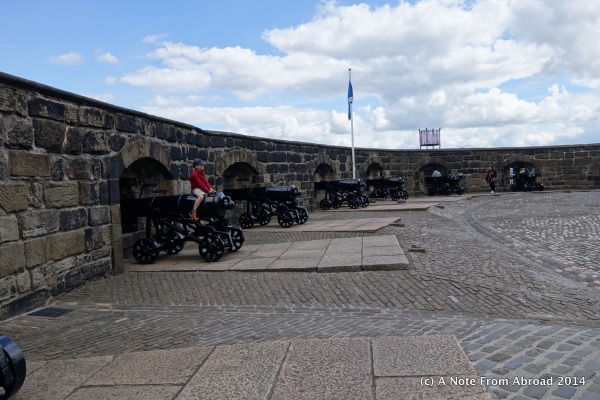 Upon leaving we walked part way down the Royal Mile, briefly looking inside a few shops, having a sample of the local beverage of choice, found one we loved and ended up purchasing a small bottle of Bruadar (a malt whiskey liqueur). It is labeled as “the original Scottish Highland Liqueur, a unique blend of malt whisky, honey and sloes? (I don’t know what that is). Must look it up when I get Internet service again. Their web site is http://www.scottish-liqueur-centre.com if you are interested.

Cutting back down hill we came out at the depot in plenty of time to catch a return train back to Queensferry.

Gratitude Moment: Today I am grateful for black clothes. They don’t show the dirt, cover up smudges and camouflage my weight. They go with almost anything, making it easier to mix-and-match my limited travel wardrobe. From little black dress to black slacks, jacket and a black tank top, I can dress for (almost) any occasion. Throw in a couple of scarves and a few t-shirts and I’m good to go!

Hi and welcome! We are Tim and Joanne Joseph and we have just embarked on our latest adventure. We hope you will join us!
View all posts by Tim and Joanne Joseph →
This entry was posted in Europe, Scotland and tagged Edinburgh, Edinburgh Castle, Photography, Queensferry, Scotch, Scotland, Travel, Whiskey. Bookmark the permalink.