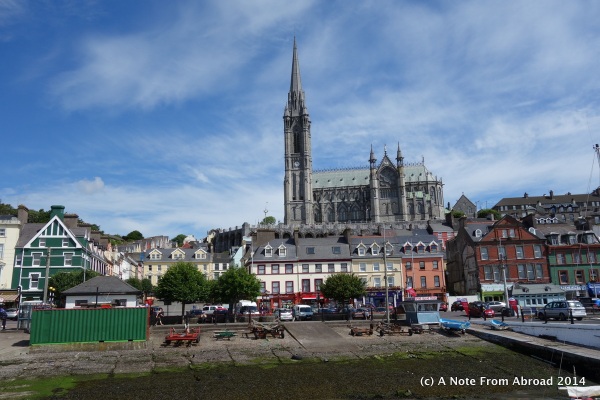 This is a city known by three names. Originally it was known as Cove, located in the harbor for Cork. In 1849, Queen Victoria first stepped foot on Irish soil here. To commemorate the occasion, the town was renamed Queenstown. In 1920, the town reverted to its original name, using the Irish spelling, Cobh (but pronounced as “Cove”). Confused yet?

Cobh sits on the second largest natural harbor in the world after Sydney. Sadly it is linked to several maritime heartbreaking stories.

Immigration ~ there were two major factors that lead to a massive exodus from Ireland. The first was by far the largest and was brought on by the failure of the potato crops resulting in a horrendous famine. Almost 1/3 of the Irish population left the country to start a new life somewhere else. Many made their way to Canada and the USA.

Another group were the criminals. If one was caught committing a crime ranging from theft to murder, the sentence could be “transportation”. Loaded onto a ship, chained under deplorable conditions, this group was mostly sent off to Australia.

We walked through a wonderful exhibition located right at the pier that documented much of this story.

The Titanic ~ The “unsinkable” ships last port of call before the fated transatlantic voyage was here in what was then called Queenstown. We are all familiar with the tragic story of the newest ship afloat which struck an iceberg on her maiden voyage and sank to the bottom within a very short time. Thinking the ship to be indestructible, the design decision had been made to reduce the number of lifeboats from 60 down to only 20, utilizing the space for larger public space and decks instead.

Promenade deck of the Titanic – photo from exhibit

The White Star Line office (the company that owned the Titanic) is located right next to the pier where our ship is docked. The building now houses the “Titanic Experience” where we spent an hour learning more about the 123 passengers that boarded here.

We looked out onto the remains of the original pier the passengers walked upon as they loaded onto tenders to take them to the Titanic which was anchored at the entrance to the harbor.

The Lusitania ~ struck by a German torpedo, the Lusitania was sunk close to Cobh. The survivors as well as recovered bodies were brought here. In the heart of town is a memorial for the victims, the survivors and for those that took part in the rescue efforts.

The town itself is colorful, and not just the flowers this time, although they too are in abundance. Sitting on a hill that immediately slopes up from the water’s edge. Rows of multi-colored homes line the steep streets. St Colman’s Cathedral dominates the skyline.

“The deck of cards”

Right next to the pier is a statue of Annie Moore and her two younger brothers. Departing from Queenstown on the SS Nevada on December 20, 1891, she arrived in New York City on January 1, 1892 on her 15th birthday. She was the first passenger to be processed through the then newly opened Ellis Island Center.

Gratitude Moment: Today I am grateful for all those that risk their own lives in an effort to save others. This includes our military, police force, fire fighters, medical personnel and numerous volunteers that step up to the plate, lend a helping hand, go on search and rescue missions, man make-shift emergency medical units or overnight shelters. They carry the dead and wounded, provide food, give comfort to survivors and family, and help rebuild homes and lives.

Hi and welcome! We are Tim and Joanne Joseph and we have just embarked on our "next chapter". At a stage in life where traveling the world, taking pictures, and sharing our adventures with friends and family will be our dream come true.
View all posts by Tim and Joanne Joseph →
This entry was posted in Europe, Republic of Ireland and tagged Cobh, Cove, Immigration, Irish, Lusitania, Photography, Princess Cruise, Queenstown, Republic of Ireland, Ruby Princess, St Colman's Cathedral, The deck of cards, Titanic, Travel. Bookmark the permalink.

4 Responses to Cove, Queenstown or Cobh, Ireland ~ A city with three different names