Norway ~ Hellesylt, Geiranger, the Arctic Circle and the Midnight Sun

Tuesday June 10th ~ At sea, crossed over the Arctic Circle

This morning the water was like a bathtub, calm, smooth and not a wave in sight. It is now mid afternoon. About an hour ago we officially crossed latitude 66 degrees 33’; officially entering the Arctic Circle. This marks the southern-most edge of the Polar Day – The Land of the Midnight Sun. 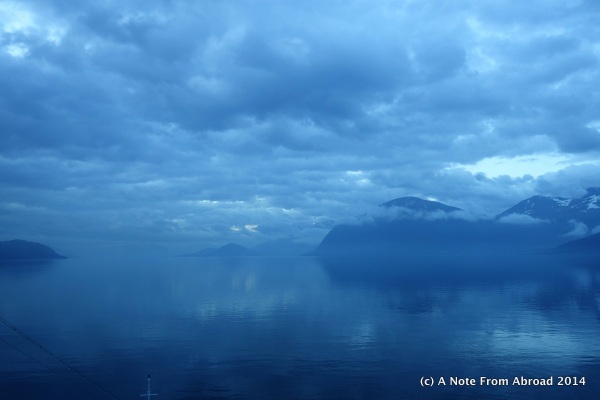 Middle of the night, just before reaching the Arctic Circle

For the next week, until June 18th we will be in daylight. The sun will not set.

Yesterday our ship anchored briefly in Hellesylt, just long enough for around 150 passengers to tender ashore. Tim and I were in that group as we embarked on a full day excursion to witness the majesty of the Norwegian Fiords.

And majestic they are! But I should let you decide for yourself after you take a look-see at our pictures below…

The ship then set sail on up the Norwegian coastline to anchor in the small bay facing an even smaller village at Geiranger with a year-round population under 300 people. We would catch up with the ship late in the afternoon.

But back to our tour…

With this cruise being completely and utterly unplanned when we left Los Angeles last March we had done exactly zero research on where we were headed. We spotted an email from Princess Cruises last month with what sounded like a great price for a 16 day cruise. Tim had mentioned in fleeting a couple of times that Scandinavia was of interest to him someday, so on a complete whim, we booked this cruise as well as a followup of the British Isles shortly after this cruise ends.

So here we are, on a ship with no idea where we are going other than north, and no idea what is to be seen along the way. As luck would have it, a couple of days ago we had a lady traveling alone join us for lunch. She and her late husband had been on numerous cruises over the years. In fact she was in the travel industry and had sold cruises for over 25 years. She was a bit of an expert on them. Of all the different itineraries she had taken over the years, this was her very favorite. 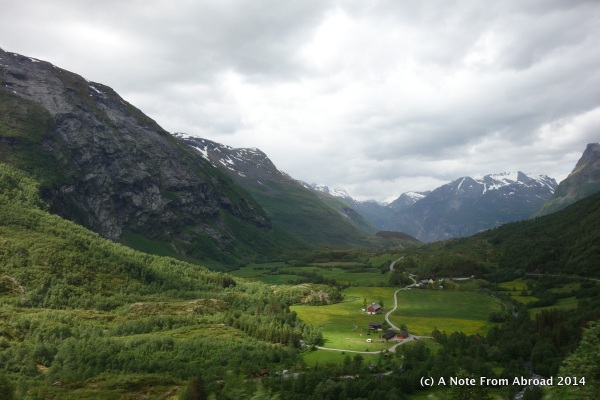 She graciously and with insight made a few suggestions as to what tours would give us the best overview and allow the photo bug in me to be happy. The Hellesylt to Geiranger cross-country trip was one she highly recommended.

Hellesylt was tiny, compact and snuggled in amongst the mountains. They had a couple of shops, a few small houses, a school, church and one bank. The bank was open on Thursdays only.

Route we would follow is marked in red on this map

I’ll quote the tour description from the Princess tour order form as I fill in some photos I snapped along the way:

“This all-day tour takes you on a scenic drive through the natural wonders of the Geirangerfjord District. You’ll pass the Horninday Bridge and witness the shimmering turquoise waters of the nine-mile Stryn Lake.” ~ Princess Cruises brochure

“You’ll continue to Grodaas where a snack of coffee and cakes awaits.” 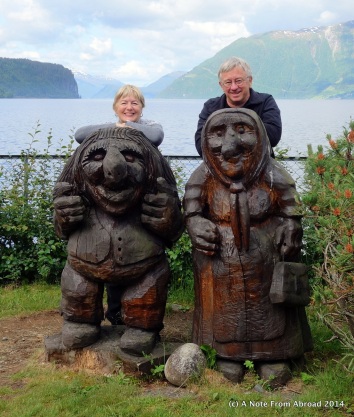 “Next on your itinerary is a complimentary three-course, Norwegian country lunch at a local hotel. After a delicious meal, you’ll have free time to shop for souvenirs and gifts. Close to Hjelle, as the start of the old Srynefjell mountain road is Buldrefoss Waterfall. Here the waters thunder and roar as they dive to the valley below.”

Tim at the falls

“The immense Tystig Glacier comes into sight. Its slopes are home to the summer ski school, “Stryn Summerski”. Your tour continues to Mt. Dalsnibba for breathtaking views of the powerful Geirangerfjord, and Flydalsjuvet, a popular sightseeing point from which to view the Norwegian fjord landscape.” 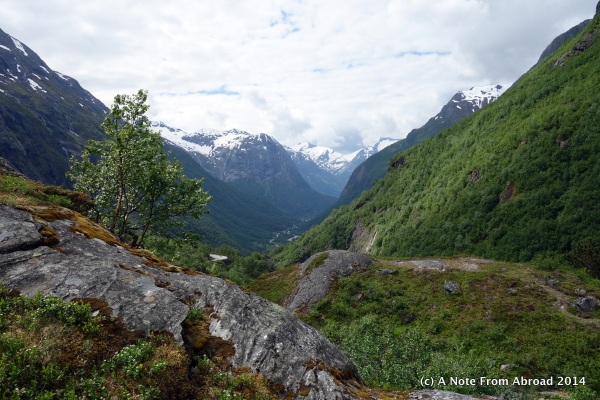 Our view as we climbed the mountain roads 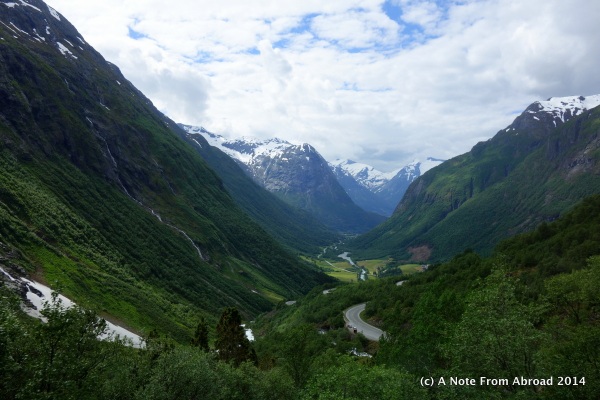 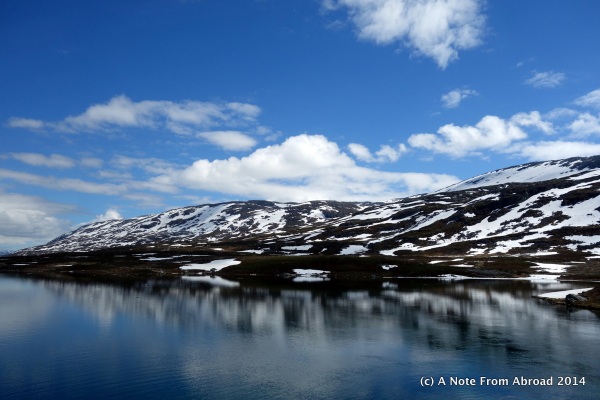 Patches of snow and some ice still on the lake

Tim and Joanne at Mt. Dalsnibba 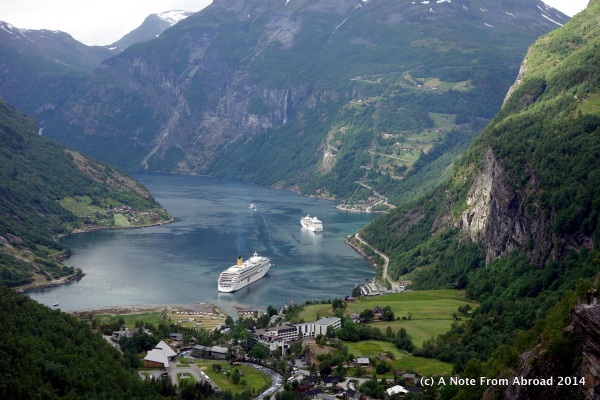 This is taken from Flydalsjuvet overlook

After our tour ended, we had time to walk around the small town of Geiranger for a short time before loading on to a tender and returning to our floating home. 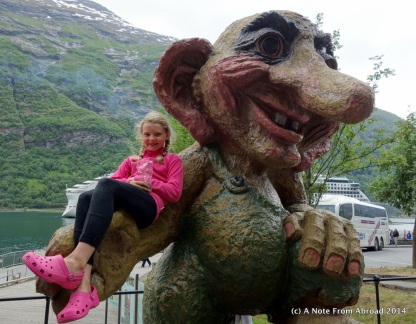 Troll statues are all over Norway

This waterfall comes right into town

What a day it turned out to be! I took over 300 pictures and had a hard time slicing it down to only a few. I felt like I was throwing away treasured children, which of course is silly, but I finally managed to delete some, and narrow down to those posted here.

Back on board yesterday afternoon, we lounged on the deck as we cruised out of the harbor and spent several hours passing through the fjord. The steep walls towered overhead, dwarfing our ship. Waterfalls cascaded down both sides, reflecting in the light, waving us on. 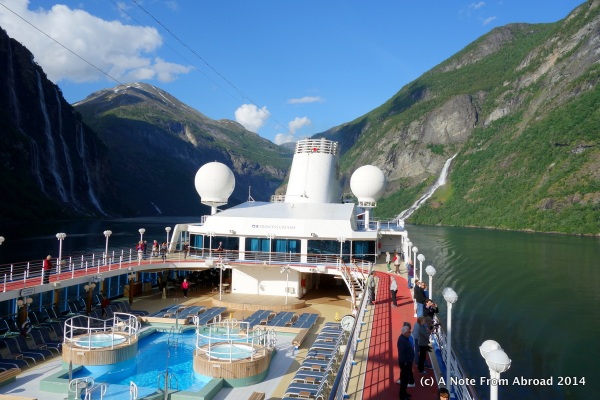 The Ocean Princess weaving her way along the Fjord

Waterfall opposite “the seven sisters”. This represents the fella that could not win their hearts, he has taken to drink (can you see the bottle?)

Gratitude Moment: Today I am grateful for endless sunshine. What an amazing, yet strange feeling that the sun will not go down below the horizon for us over the next week.

Hi and welcome! We are Tim and Joanne Joseph and we have just embarked on our "next chapter". At a stage in life where traveling the world, taking pictures, and sharing our adventures with friends and family will be our dream come true.
View all posts by Tim and Joanne Joseph →
This entry was posted in Europe, Norway and tagged Arctic Circle, Flydalsjuvet, Geiranger, Geiranger fjord, Land of the Midnight Sun, Mt. Dalsnibba, Norway, Photography, Princess Cruise, Travel. Bookmark the permalink.

5 Responses to Norway ~ Hellesylt, Geiranger, the Arctic Circle and the Midnight Sun