Vienna is the capital and largest city in Austria.  Known locally as Wien, it has a population of approximately 1.75 million people.  The city center has been designated as a UNESCO World Heritage Site.

When I hear the name Vienna, it immediately gets me thinking about music, pastries and the Viennese waltz.  The “cream of the crop” of musical nobility have at one point either been from, studied in, moved to or performed in Vienna.  Names like Mozart, Johann Strauss (both father and son), Haydn, Beethoven, The Vienna Boys Choir,  and the Vienna Philharmonic Orchestra are all associated with this fair city.

“Ode to Joy”, a classic Beethoven composition is one of my favorites.  It was recently adopted by the EU as the Anthem of Europe.

Another renowned son known by everyone is Sigmund Freud.

Also famous – the Lipizzaner horses.  This is a smaller breed of horse, and rather rare with only around 3000 being registered today.  Just the stallions are trained for performing a complex ballet of dressage.  The famous Spanish Riding School is located here in Vienna. The Lipizzans have been relocated several times due to wars, and were even put under General Patton’s protection, a horse lover himself, during World War II.

Born  black, they slowly turn colors and by the time they are around seven years old, the horse is a grayish white.  I had the privilege of seeing them perform years ago in San Francisco and I still hold dear that memory.

I would have loved to see them perform again, but unfortunately that was not an option on this itinerary.  We walked past the training stables as several of the horses were being led into the workout ring.  In the past only men were allowed to ride the Lipizzans but there are now several women riders as well.

For more information on this remarkable line, just click here.

Famous foods from Vienna include Wiener Schnitzel and Sacher Torte. 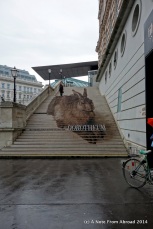 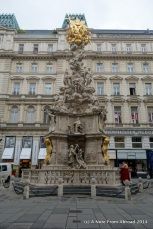 Of course I went inside the cathedral…

An optional afternoon tour took us to Schönbrunn Palace.  This 1441 room palace was the summer home for many of the Habsburgs during their 600 year rule.  Wanting a palace that rivaled Versailles, they invested heavily and decorated lavishly.

With the ending of the monarchy in 1918, the palace became the property of the Austrian Republic and was turned into a museum.  In 1996 both the palace and the gardens were named a UNESCO World Heritage Site.

No photography was allowed inside, but I did take several photos of the exterior, the fountains and the gardens. 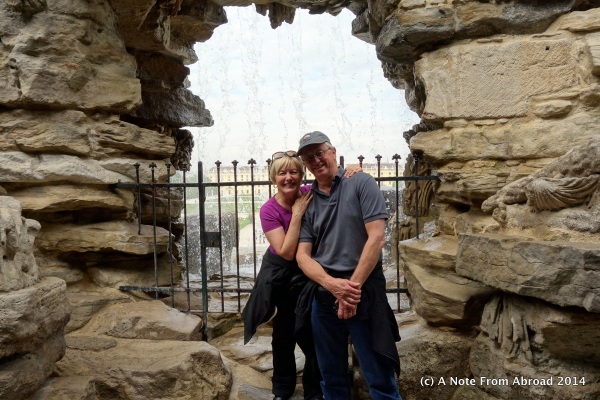 Tim and Joanne with Schönbrunn Palace behind us (through the fountain) 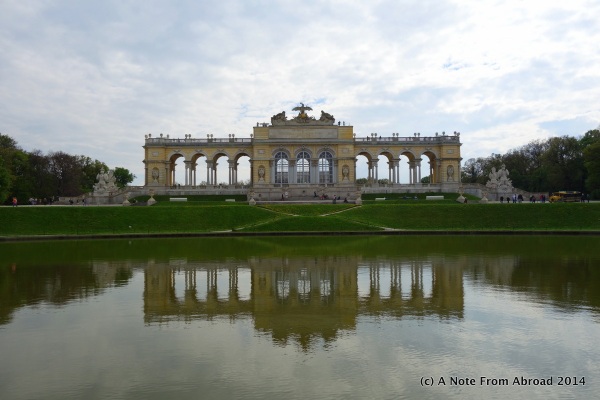 Monument at Schönbrunn Palace, reflecting in the pond

Another option we signed up for was a Viennese Classical Concert.  I have to admit that this was nowhere as grand of a performance as I had visualized.  Especially after attending a concert only a few nights earlier in Budapest at the Opera House, I was expecting a larger stage, more instruments, better acoustics and a more lavish setting.  Still the quality of the music was excellent and we enjoyed our evening.  I think in hindsight, we would have been better off doing some research and making our own booking.

GRATITUDE MOMENT:  Today I am grateful for music.  It can relax me, take me away on a journey, connect me to a forgotten memory, make me laugh, make me smile and make me cry.  I can tap my foot, bob my head or joyfully sing along if no one is near.

Hi and welcome! We are Tim and Joanne Joseph and we have just embarked on our latest adventure. We hope you will join us!
View all posts by Tim and Joanne Joseph →
This entry was posted in Austria, Europe and tagged Concert, Mozart, Photography, Schonbrunn Palace, Strauss, Travel, UNESCO, Vienna. Bookmark the permalink.