I’m rather embarrassed to admit that I really did not “get” Gaudi.  After visiting Park Guell, and walking through La Pedrera, as well as walking past the front of his well-known building on the “block of discord”, I was still feeling ambivalent at best.

I thought I understood his love of nature and his desire to incorporate it into his designs, but I was left puzzled and more like I had visited a hollywood set, or something out of Disneyland rather than a work of architectural brilliance.

When he graduated from his architectural training, his professors summed it up best, “Who knows whether we have given the degree to a madman or a genius: only time will tell”.  I was leaning toward the former.

But that was about to change…

At the young age of 31, only 5 years after completing his studies, he was asked to take over the then one year old project, Sagrada Familia.  Originally designed to be a “typical” gothic style church, Gaudi instead redesigned the church using his unique and imaginative curvilinear Art Nouveau style.

I felt like I had a bit of a handle on Gaudi, until I walked inside.  Nothing could prepare me for what I saw: 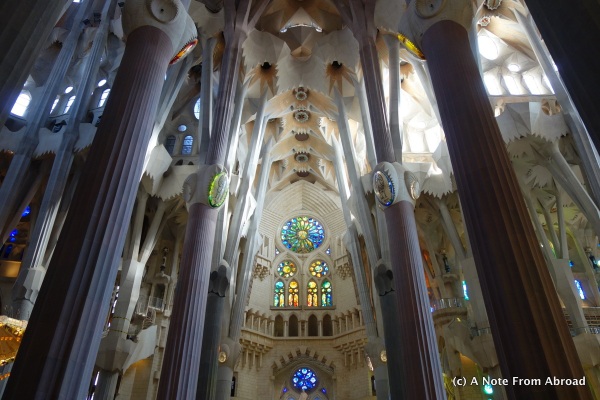 First impressions as you walk inside – quite literally, OMG!

Marble and stone columns branch at the top representing tree trunks (balances the weight to support the heavy towers above) and incorporates his love of nature.

Light streams from all angles.

Tim looking at a stairway 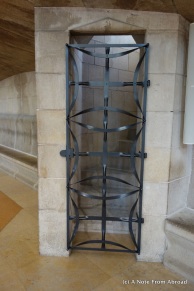 The twisted metal I had begun to associate with Gaudi work

Looking up one of the columns

Looking up at the ceiling from the center of the church 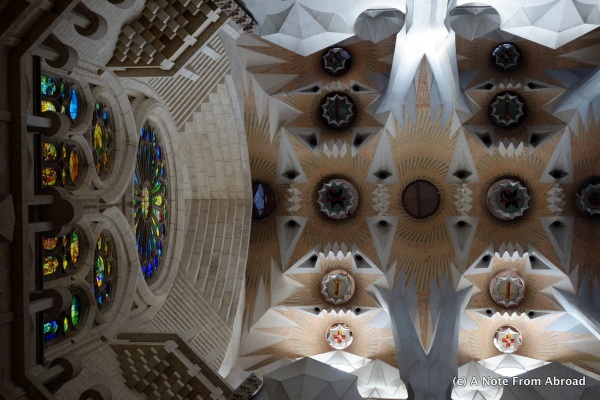 Looking straight up makes you a little dizzy

There is SO MUCH detail and information about Segrada Familia that to try to cover all the exterior, each part of the interior, the history, the crypt, his school and workshop, and the museum would cover several blog posts.

The symbolism and stories told on each exterior facade are fascinating.  The Nativity facade is by far the most ornate.  It is the starting point and tells of Jesus birth and early years.  The three portals, for faith, hope and charity.  There is even a fir tree over the entrance.  This entrance was built while Gaudi was still alive. 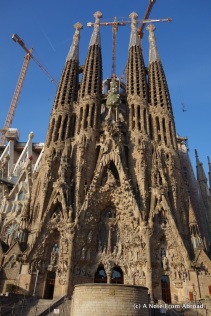 The western side is the Passion Facade.  It tells the story of Jesus persecution and crucifixion.  In a decidedly different style, it is still full of symbolism, mystery and meaning.

The cloth used to wipe Jesus’ face held up. On the lower left, Gaudi’s face taken from the last known picture of him, is sculpted on one of the people. 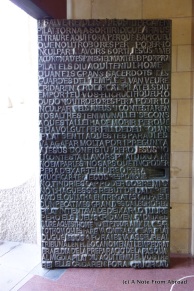 I hope that you will take a look at the link to the Wikipedia page or their own site to see more pictures, learn about the ongoing work, and more.  Even better, get on an airplane at your earliest convenience and come see it for yourself.

“It was built as the main access gate for the 1888 Barcelona World Fair by architect Josep Vilaseca i Casanovas.” ~ Wikipedia

We have had the pleasure of visiting similar monuments in Paris, London and Bucharest. 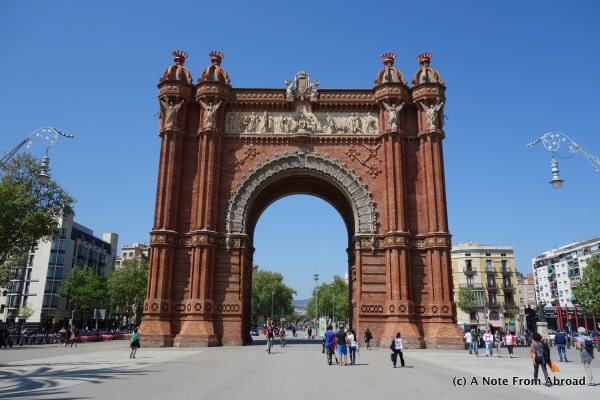 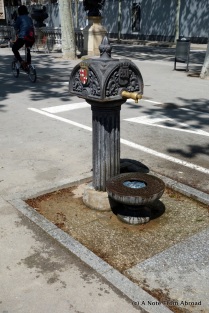 Reading in the sun

This 70 acre historical garden is located at the northeastern edge of the old town, adjacent to the Arc de Triomf.  It houses a couple of museums, the zoo, an enormous fountain and sculptures also attributed to a young (still a student) Gaudi, a lake, and open green spaces to enjoy.  My friend Anna suggested we take a look and I’m so glad she did. 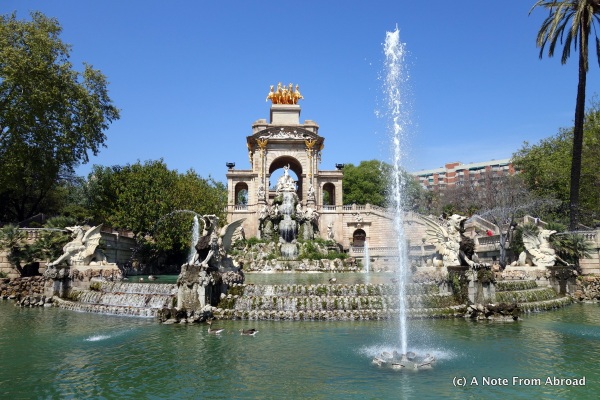 Fountain in the park 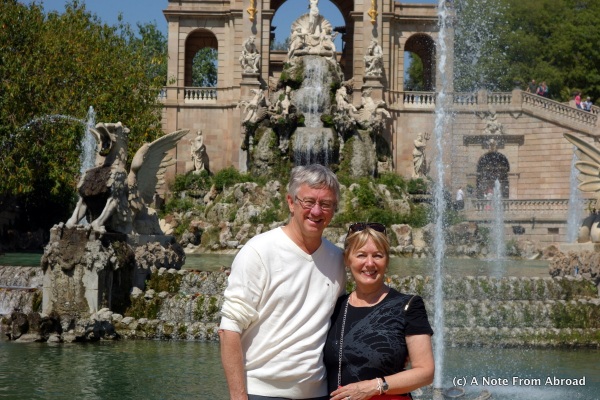 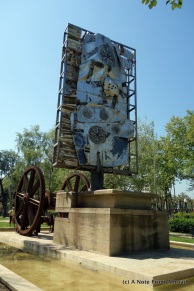 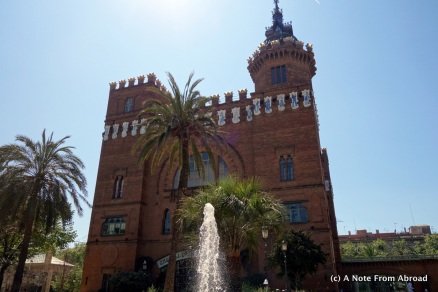 Castle of three dragons which houses the zoology museum

Hopping on the metro once again we headed back toward La Rambla.  The metro is easy to use with good signage and each route color coordinated.  The pocket-sized maps make planning your day simple. 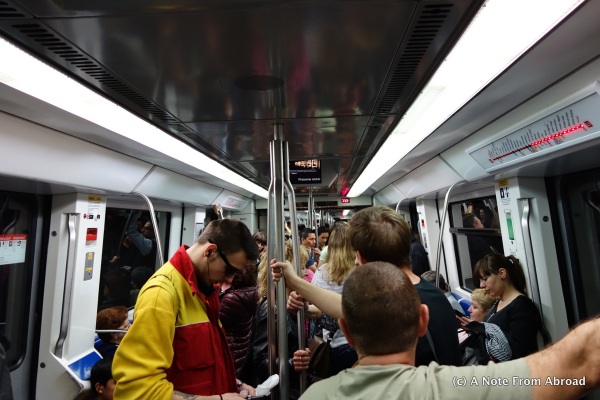 We had been warned that the food along this tourist route was fair at best, but we were hungry and stopped in at La Poma for a bite.  Located just a block from Placa Cantalunya, it was expensive as was expected, but we did enjoy it non-the-less.  The meal came to 34 Euros ($47 USD) for the two small dishes, one glass of sangria, one small bottle of water, and one dessert (apple cobbler with ice cream). 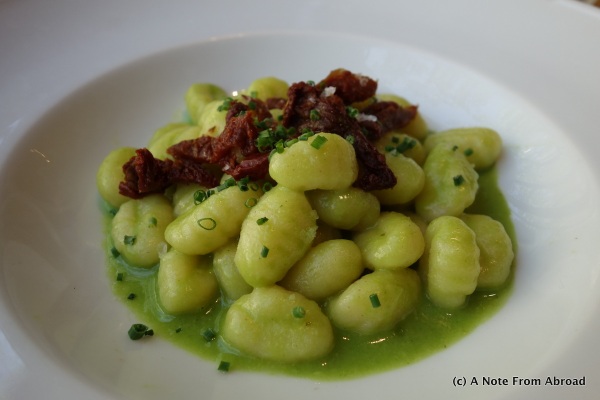 Gnocchi in pesto sauce with sun-dried tomatoes and honey

GRATITUDE MOMENT:  Today I am grateful that I did not give up on Mr. Gaudi. From thinking he was a bit “different” to now appreciating his “vision”, I have come full circle.

Hi and welcome! We are Tim and Joanne Joseph and we have just embarked on our "next chapter". At a stage in life where traveling the world, taking pictures, and sharing our adventures with friends and family will be our dream come true.
View all posts by Tim and Joanne Joseph →
This entry was posted in Europe, Spain and tagged Arc de Triomf, Barcelona, Gaudi, Park de la Ciutadella, Photography, Sagrada Familia, Spain, Travel, UNESCO. Bookmark the permalink.