Our weather cleared up and it was time to get out and explore.  Originally we thought we would take the hop-on hop-off sightseeing bus, but decided to simply walk.  As I mentioned earlier, the Barcelona Cathedral is only a couple of minutes walk from our doorstep.  We had walked past it on our first day in town, but were too tired to go inside. Today we decided to take a look at the interior.

Barcelona Cathedral aka Cathedral of the Holy Cross and Saint Eulalia

This is a gothic cathedral that was primarily constructed from the 13-15th century. 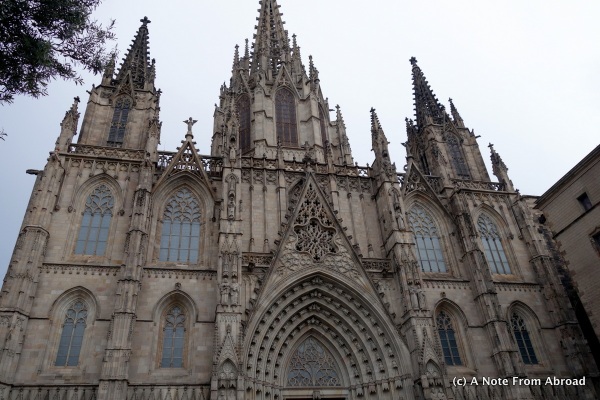 Cathedral of the Holy Cross and Saint Eulalia (Barcelona Cathedral)

“The cathedral is dedicated to Eulalia of Barcelona, co-patron saint of Barcelona, a young virgin who, according to Catholic tradition, suffered martyrdom during Roman times in the city.” ~ Wikipedia

St. Eulalia was only 13 years old when she was tortured for refusing to recant her Christianity.  The 13 methods of torture are beyond barbaric (I guess that is really a crazy statement as any torture is barbaric) and included cutting off her breasts, putting her in a barrel that had knives stuck in it and rolling her down a hill and finally decapitation.

Today the cloister encloses the well of the geese where 13 geese are kept in her honor. 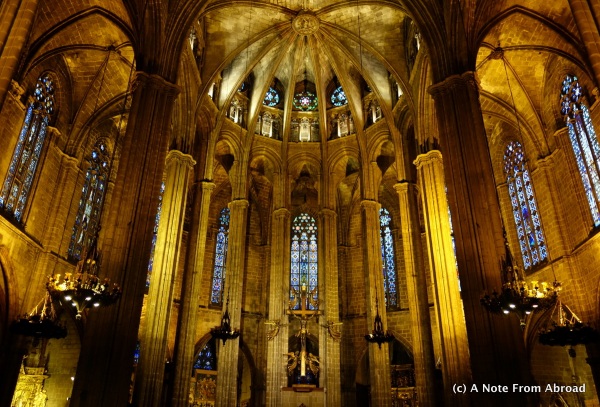 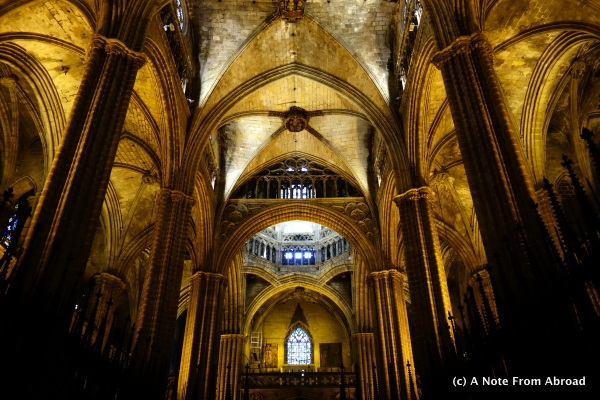 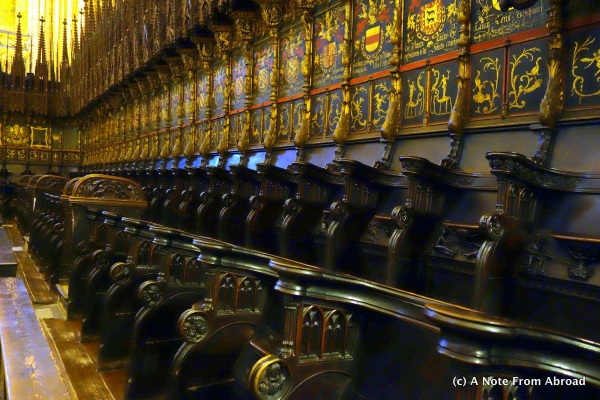 The crypt was closed when we were there so I am including a shot from the Internet to show you St. Eulalia’s final resting place. 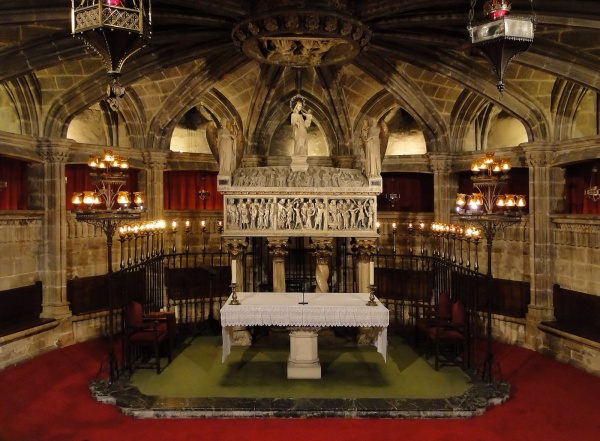 Catalonia Square is considered to be the city center and where several key neighborhoods come together, including the old city (Barri Gotic) and the 19th century Eixample.  It is also the starting point of La Rambla. 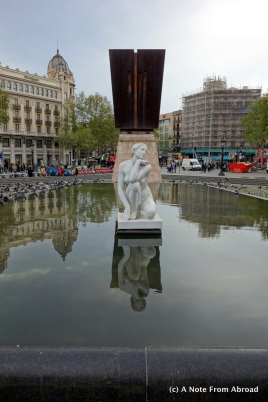 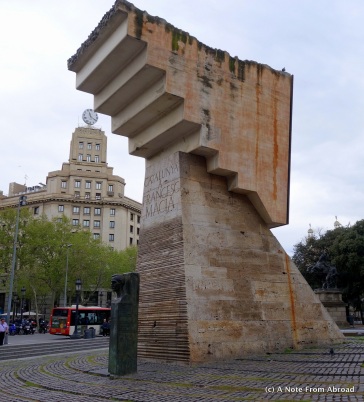 A tree lined boulevard running from Plaza de Catalunya to the Christopher Columbus Memorial (Mirador de Colon) and the waterfront of Port Vell. This tourist magnet has gotten a bad rap due to the crowds that swarm here during peak times as well as pick-pockets. 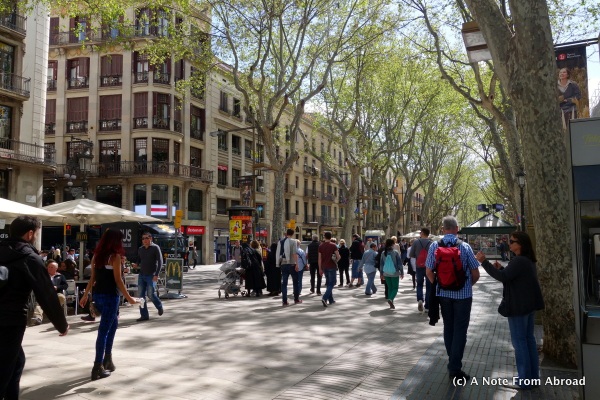 Not too crowded today, we enjoyed our stroll the length of the street as the sun finally came out. Some notable buildings along the way included the Liceu Theater, the Museum of Erotica, the Palace of the Virreina, and La Boqueria Market. 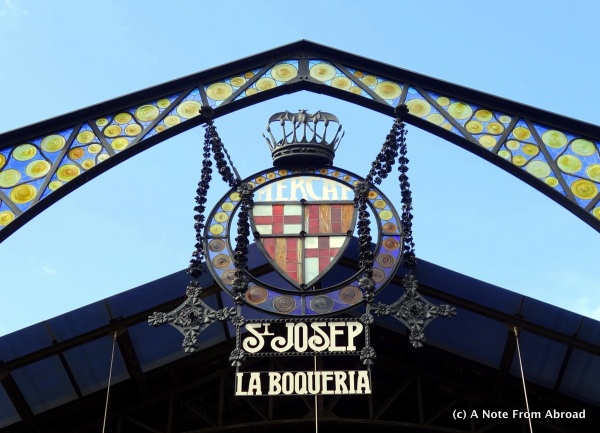 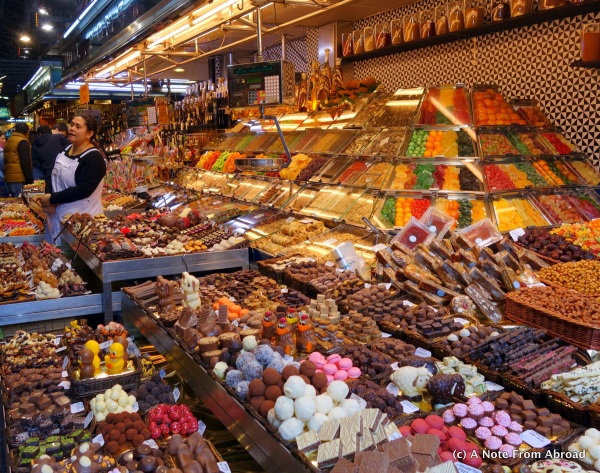 Wow, wow, wow.  A large public market, with an enormous variety to choose from, this place is a foodies’ dream.  I could have spent 1/2 a day just roaming past the individual stalls. 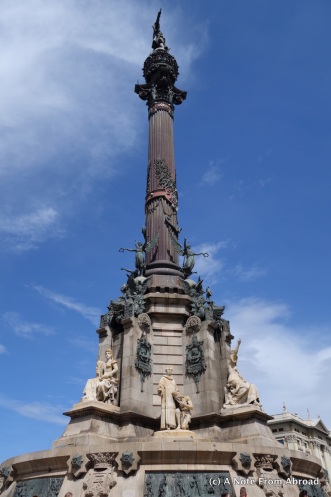 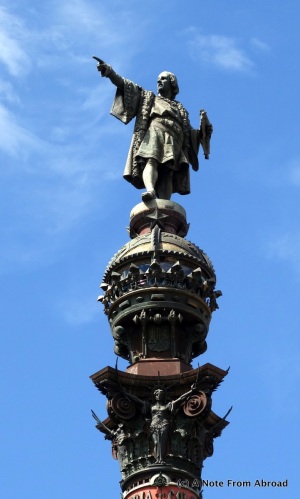 Top of the Columbus Monument

At the foot of La Rambla where it meets up with the waterfront is an impressive monument to Christopher Columbus.  But the story here is not the monument, but the VIEW.  For 4.5 Euros you can take an elevator up to the observation platform where you can enjoy a magnificent 360 degree panorama of Barcelona. 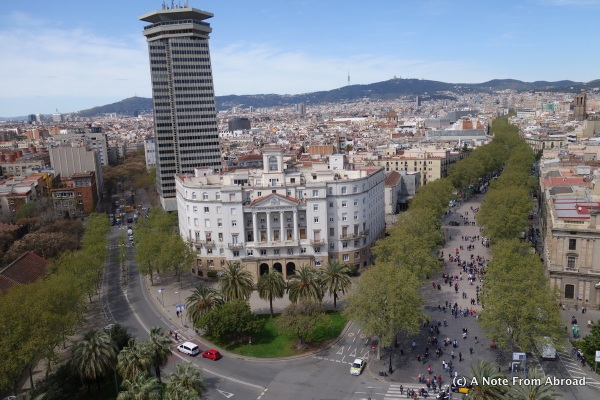 La Rambla on the right 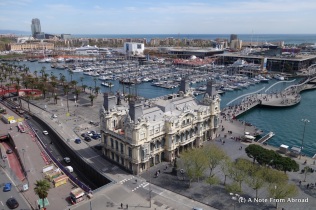 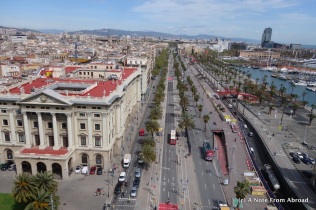 View toward the East

GRATITUDE MOMENT:  Today I am grateful for my husband nudging me to go to the top of the Columbus Monument.  The view was so worth it!

Hi and welcome! We are Tim and Joanne Joseph and we have just embarked on our latest adventure. We hope you will join us!
View all posts by Tim and Joanne Joseph →
This entry was posted in Europe, Spain and tagged Barcelona, Catalunya, Cathedral, Christopher Columbus, La Rambla, Mirador de Colon, Photography, Port Vell, Ramblas, Saint Eulalia, Spain, Travel. Bookmark the permalink.