Monday, March 24th, On a train

Today is a travel day.  The rail system in India was on time, however that is not always the case I was told.  The station was old, but not overly crowded as we waited for our train to arrive.

“The Shatabdis are among the fastest trains in India and the Indian Railways considers them as prestigious.” ~ Wikipedia

Inside the train was well-worn, but we had pre-assigned seats with our group all together. Interestingly the family of six in our group that were from Bangladesh were all offered drinks and meals, but none of the rest of us were offered anything.  We teased them that being of Indian decent, they had the “home-court” advantage.

After asking to be served, and again ignored, our tour leader managed to get one meal for me.  Tim and I had not planned on eating, but wanted to give the food to the children when we got off the train.  I have since learned that may not have been a good idea as it only encourages the children to beg.

Tragically some families have even maimed their children intentionally so that they can beg on the streets.  Seeing a deformed or hungry child is hard to walk by.

After just under 3 hours on the train, we transferred to a different bus.  Our lunch stop was in the small village of Orchha on the River Betwa. 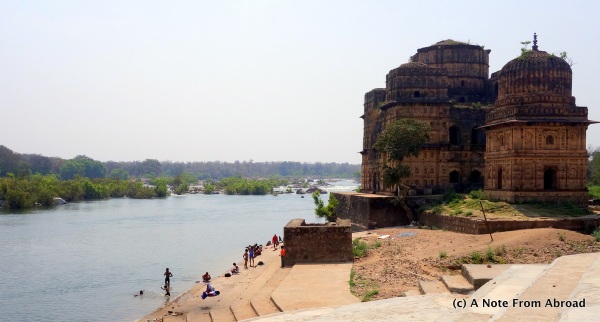 Bathing and swimming in the River Betwa

The women seem to be the ones doing the heavy labor

We also had the opportunity to walk around and see the 17th century Chaturbhuj Temple during our lunch break.

“Chaturbhuj, which literally means one who has four arms; and refers to Lord Vishnu” ~ Wikipedia 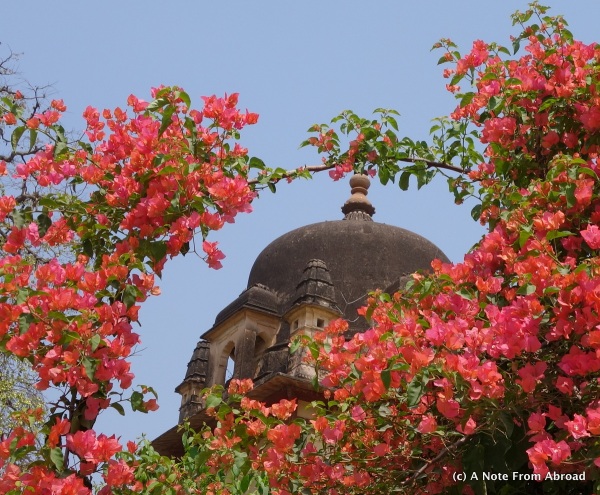 Gratitude Moment: Today I am grateful for having a full stomach.  I can not imagine having to beg on the streets to get enough money to feed myself.

Hi and welcome! We are Tim and Joanne Joseph and we have just embarked on our "next chapter". At a stage in life where traveling the world, taking pictures, and sharing our adventures with friends and family will be our dream come true.
View all posts by Tim and Joanne Joseph →
This entry was posted in Asia, India and tagged Chaturbhuj Temple, India, Orchha, Photography, River Betwa, Shatabdi Express, Train, Travel. Bookmark the permalink.