Swaminarayan Akshardham, Drinks and High Tea at the Imperial Hotel

The morning was spent at Swaminarayan Akshardham. Opened in 2005, this modern day complex sits on a sprawling 100 acre site.

“Swaminarayan Akshardham in New Delhi epitomises 10,000 years of Indian culture in all its breathtaking grandeur, beauty, wisdom and bliss. It brilliantly showcases the essence of India’s ancient architecture, traditions and timeless spiritual messages. The Akshardham experience is an enlightening journey through India’s glorious art, values and contributions for the progress, happiness and harmony of mankind.” ~ Akshardham.com

With rigid rules and tight security, they maintain a strict no photo policy.  Cameras, cell phones, purses, other bags and most personal items could either be checked or left in your vehicle.  There was individual screening conducted, much like airport security, complete with being subjected to a walk through metal detector, then swiped with a hand detector and finally a visual inspection of my small fanny pack.

They even confiscated my spare camera battery which I had left in my pack.  They did offer to hold it for me while we walked through the site.

Walking inside the grounds afforded us a magnificent view of Akshardham.  I immediately went through camera withdrawals.  I realize that I have become accustomed to telling our travel stories through my pictures and there is no way to adequately do justice to this site without a visual presentation.

Here is a link to the online photo gallery that will give you some idea of how magnificent this site was.  I was really sad to not be able to take my own pictures, but had to settle for taking away wonderful memories instead.

They did have a photographer available to take pictures with Akshardham behind you.  For about $2 you got a nice 8×10 and I thought that was a bargain.  Here is the shot of Tim and me: 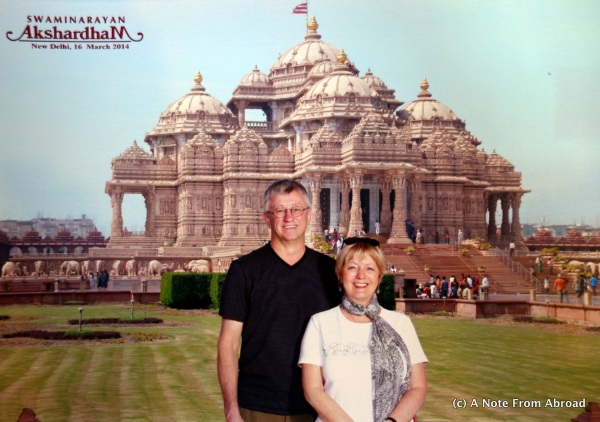 Tim and Joanne at Akshardham

The intricate patterns, life-size elephant carvings, paintings, massive doors and so much more reminded me of pictures I have seen of Angkor Wat, mixed with other SE Asian flair.  We spent a couple of hours strolling through the main buildings, but you can easily take up half a day if you want to visit the museum, see the movie and take the boat ride.

I was feeling the effects of jet-lag in the afternoon and could barely keep my eyes open.

A fellow guest (from England) at our hotel had recommended that we go to the Imperial Hotel for the afternoon high tea.  Being a Brit, and her saying it was the best she had experienced gave us high expectations and put her suggestion on our list.

Arriving way too early we had a cold drink in one of the lounges followed by a walk of the grounds and checked out the pool.

The hotel itself is lovely, elegant, regal and expensive.  The guys asked to see a double room and it was around $400 USD a night – about 10 times what we spent to stay only a short distance from there! 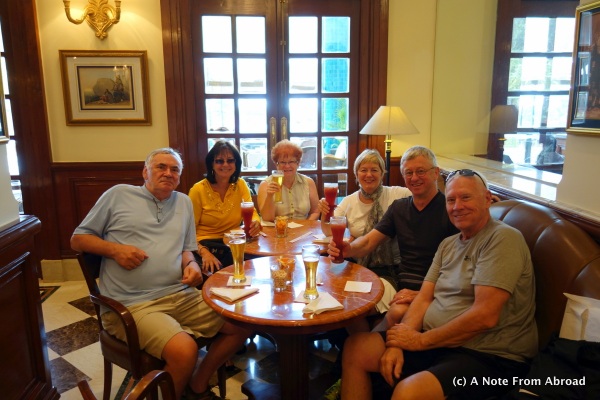 Our group of six having a drink at the Imperial Hotel 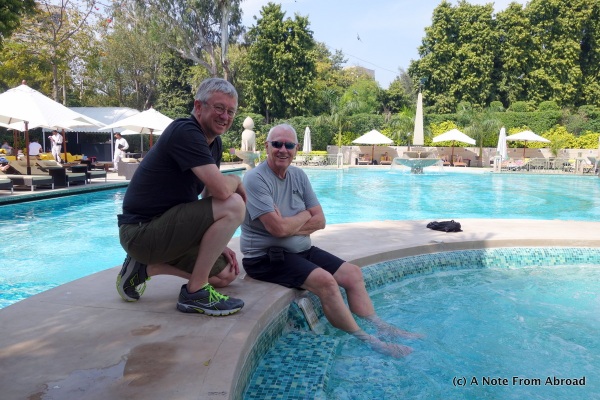 Tim with Dick cooling his feet at the Imperial Hotel

Tea is served from 3 to 6 in the Atrium.  There was a delicious selection of finger foods, small sandwiches, and both cucumber and mango shooters with many tea and coffee choices.  The desserts included cookies, small cakes, brownies and creme brulee.

It was a relaxing afternoon filled with visiting and probably what was needed more that “sightseeing”.

Tomorrow is the Holi Festival which is the main reason I wanted to come early and chose these dates.

GRATITUDE MOMENT:  Today I am grateful for mangoes.  Sweet, juicy and seem to be a favorite here in India.  I have already had a mango milkshake, mango shooter and tasted mango ice cream.