Sunday, 17th of November was one of the most jam-packed days I can remember.  Full of learning, somber reflection, excitement, thrills, laughs and holiday celebration.  It will go down in my memory as a very special day from start to finish.

Waking up in the middle of a rain forest jungle set the tone for the day.  The lush green was the perfect backdrop for our rustic bungalows. 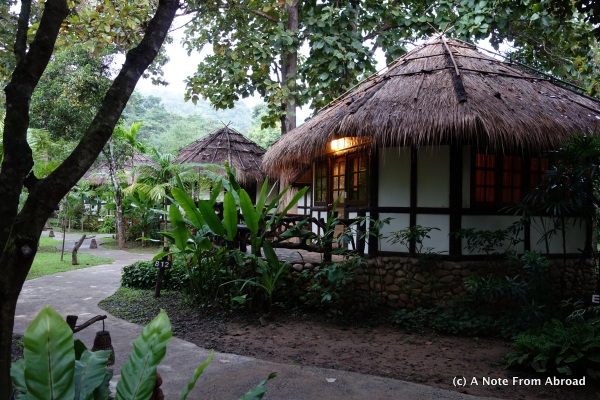 After breakfast, we left via our long tail boats for a ride down the river to the pier where our bus awaited.  This was an optional tour, and only part of our group chose to participate.  First stop was the Hellfire Pass.  During WWII, the Japanese forced POW’s to build the railroad from Thailand to Burma.  Many lives were lost during this project.  One particularly difficult stretch was this area, cutting through solid rock, mostly by hand.  We hiked 1/2 hour from the road down the hill to see for ourselves the thick rock and view a memorial. 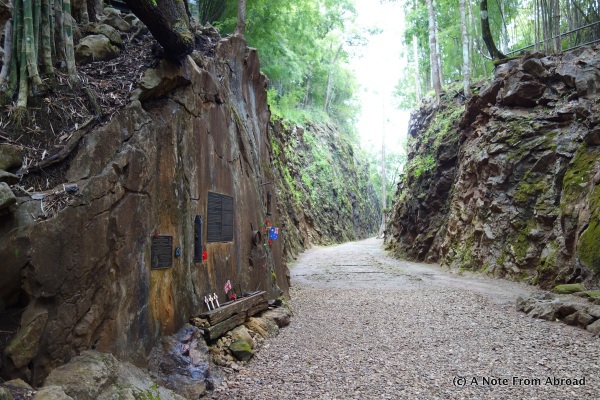 After the hike we visited the museum before loading back on the bus on our way to ride an elephant.  On the way we stopped to watch a large group of monkeys.  While taking pictures, I had crouched down low and a young one actually climbed onto my back.  Lucky for me, he was friendly and simply hung on to the back of my shirt for a few minutes until he decided to move on.  I have a picture that another traveler took and sent to me, but I need to upload it to this site.  My emails have not uploaded yet, so I will have to add that picture later.

UPDATE: Here is the picture I mentioned with a monkey on my back:

Monkey on my back – literally!

The elephant ride at Saiyok Elephant Park was so fun.  We walked up a set of steps to a platform from which we climbed onto a bench seat strapped onto the back of the elephant.  For the first 20 minutes or so our Burmese jockey kept the elephant moving along through the jungle.  All of a sudden he took my camera and climbed down.  Great, he was going to take a picture of the two of us on the elephant.  But wait, he did not get back on – instead, he had me climb off the perch and onto the elephants neck and “drive” her by myself.  He happily snapped pictures left and right as I hung on for dear life.

Of course the elephant was listening to our guides commands, following him along as we went since I had no idea how to guide him and simply tried to not fall off.  We continued on the trail to the river where he then had Tim and I trade places.  Not a simple task on the back of an elephant, but we managed.  Tim then drove for a while as our guide again snapped away.  I think he was almost as enthusiastic a photographer as I am. 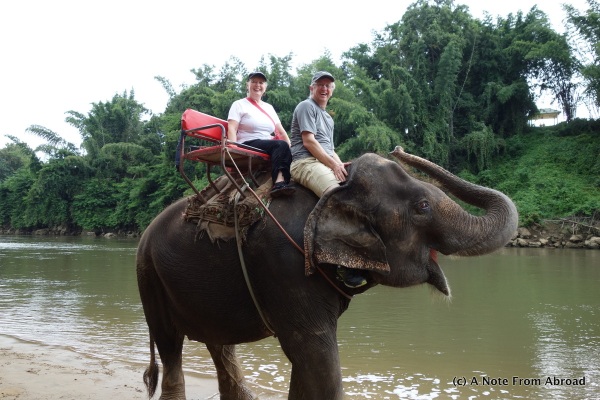 I would have been content if our day was finished now, but no, this was just the beginning. There was so much more to experience including a stroll through a local marketplace where we sampled street food before boarding a very old train that traveled along the original old tracks, aptly named the Death Railway due to the huge number of lives lost while it was being built.

Back on the bus again as we headed toward our resort.  A surprise stop and another short hike brought us to the beautiful Saiyoknoi Waterfall.  Children were floating, swimming, climbing, laughing.  What fun!

Returning to our hotel, again by long tail boat, we freshened up before heading to holiday dinner.  It was Loi Krathong which is celebrated on the full moon in November by floating hand made flower ornaments down the river.  It is capped off with Yi Peng, which coincided.  After making a wish and floating our offering off the dock, we then had the privilege of launching our paper lantern skyward as fireworks were exploded around us.  Please click on the link above to see pictures of this amazing nighttime festival.  Our festival was on a much smaller scale being in the middle of the jungle, but impressive and memorable none-the-less.

One of our tour members commented that this had been the most amazing day she had enjoyed in the past 20 years.  It certainly will be one I will long remember!

Hi and welcome! We are Tim and Joanne Joseph and we have just embarked on our "next chapter". At a stage in life where traveling the world, taking pictures, and sharing our adventures with friends and family will be our dream come true.
View all posts by Tim and Joanne Joseph →
This entry was posted in Asia, Thailand and tagged Death Railway, Hellfire Pass, holiday celebration, monkey, Photography, Ride elephant, Thailand, Travel. Bookmark the permalink.

5 Responses to Hike through Hellfire Pass, Traveling on Death Railway and Riding Elephants