Most archaeologists believe that Machu Picchu was built as an estate for the Inca emperor Pachacuti (1438-1472).  Known by many as The Lost City of the Incas, designated a UNESCO World Heritage site in 1983 and in 2007 it was voted as one of the new Seven Wonders of the World.

Up before dawn and a winding steep bus ride up the mountain, with the Urubamba River flowing far below.  Passports are required as you are ushered one by one through a checkpoint at the top of the mountain.

And then finally our first glimpse of Machu Picchu!  As I looked out, tears gently rolled down my cheeks. This had been on my “Bucket List” for a long time.  I was so moved by the grandeur and the magic of this moment.  It did not disappoint!  How wonderful it was to cross one more thing off of that very long list. 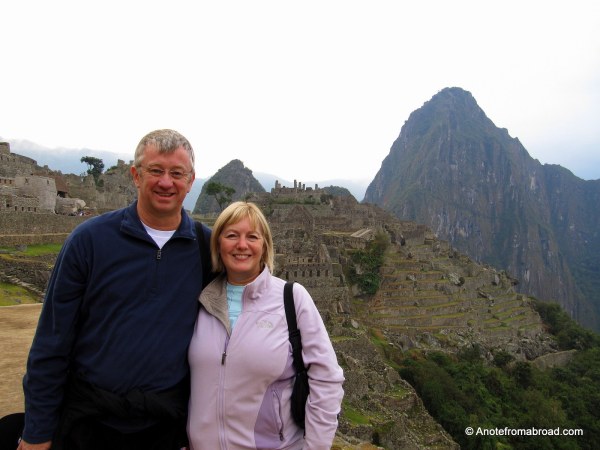 Our first look, my eyes are still moist with tears

Machu Picchu means Old Mountain.  Although known locally, it was lost to the rest of the world before being rediscovered in 1911 by explorer Hiram Bingham.  There are distinct regions that include an urban section and a rural section with agricultural terraces.  There was also an elaborate aqueduct system.

There are many highlighted places to see that were covered on a guided tour.

Known as the hitching post of the sun, it is a carved rock pillar whose four corners are oriented toward the four cardinal points.  The Inca were accomplished astronomers and used the angles of the pillar to predict the solstices.

The Temple of the Sun 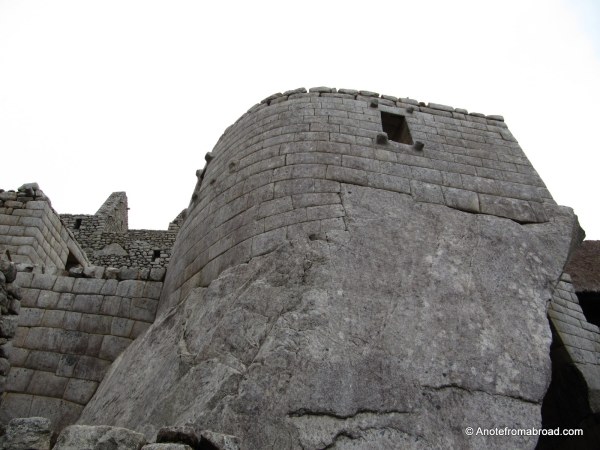 The Temple of the Sun

The temple was built to honor their god, Inti, (which is their name for the sun).  It is built on top of solid rock, in a semi-circle formation.  The well located window allows for the sun to enter during the winter solstice, and light up the large ceremonial stone in the middle of the temple.

Situated below the Temple of the Sun.  Over 100 mummified skeletal remains have been found inside with 80% of them being women.

Also of note, The Sacred Plaza with the Sacred Temple and the Temple of Three Windows, the Guardian House, Condor Temple, Main Gate, Ceremonial Rock and Huayna Picchu. 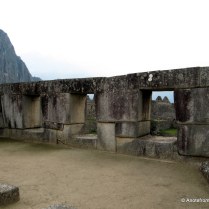 The Sacred Plaza area with the Temple of the Three Windows 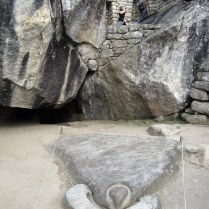 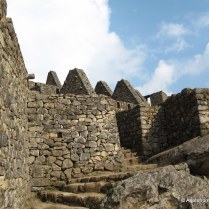 Example of Ashlar construction, in which blocks of stone are cut to fit together tightly with no mortar

But it wasn’t these highlighted temples and rocks that moved me.  It was the feeling, the serenity, the energy of this ancient place that grabbed my soul.

Looking up toward the guard-house or down into the valley far below put the enormity of this endeavor into perspective. 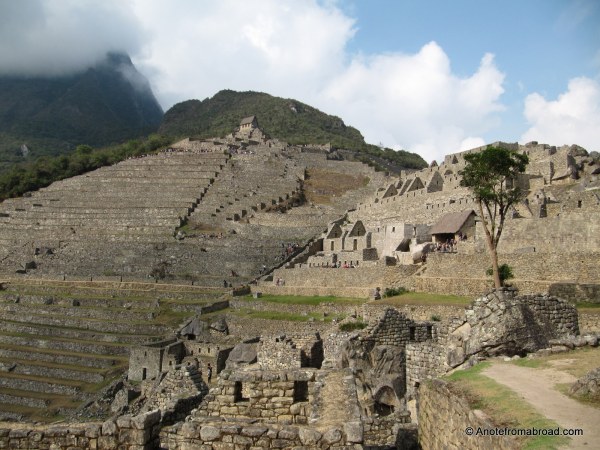 Looking up toward the gatehouse

With the guided portion of our visit completed, we had the remainder of the day to explore on our own.  Time to climb those steep steps up to the guard-house at the top. 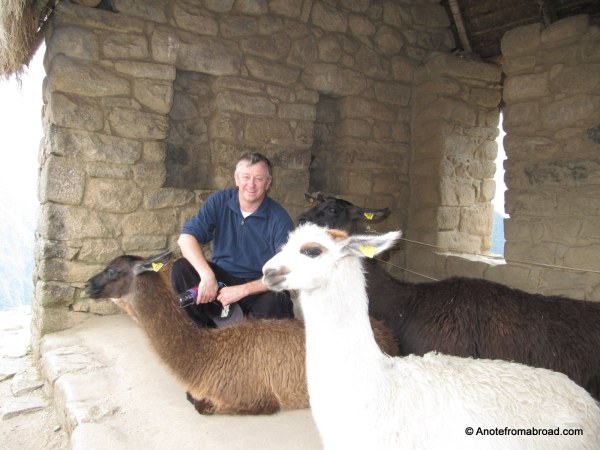 Our surprise at the top inside the gatehouse

The steps were many and steep, but the reward upon reaching the gate or guardian house was worth the climb.  Several llamas willingly posed as we joined them inside.  They were free to roam as they wished and being protected they remained calm and indifferent.

The views from the top were spectacular.

View from the top with Gus

From the top we hiked to the Inca Bridge.

The Inca Bridge is actually part of the stone path that heads west from Machu Picchu.  The spot was considered to have been of vital strategic importance for the defense of the city. 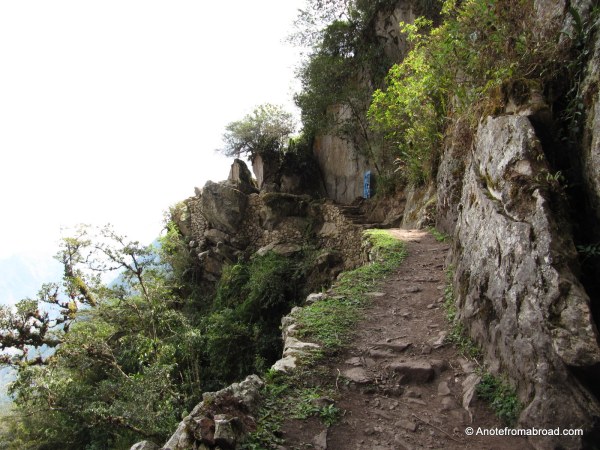 The Incas left a twenty-foot gap in the carved cliff edge.  The space was bridged by tree trunks over a 1,900 foot drop to the canyon below.  In times of danger, the Incas could remove the trunks to make this part of the trail impassable.

Inca Bridge in middle of the picture from above

As we retraced our steps back to the main plaza, we simply sat a while and took in all the majesty that was before us.

Magical moment, simply sitting and soaking it all in.

I have been asked if seeing Machu Picchu changed me, and I guess the answer would be yes.  I felt moved by the experience in witnessing an ancient site of such beauty and grandeur.  I could not grasp the work, dedication and fortitude it took to create this wonder, but I could still feel the power, energy and strength of this lost civilization.

Even more profound was the feeling of intense gratitude.  That I was and am among the fortunate ones to have the means, health and ability to travel all this way for this unforgettable experience humbles me.

I’m doubly blessed to be able to share this with my loving husband and wonderful friends.

But our trip did not end here.  That evening we took the train back to Cusco.  I will continue with our bus trip from there toward Puno, Lake Titicaca and the floating islands in the near future.

Have you been deeply moved by a particular place you have visited?  If so, please share in the comments below.

Thank you for visiting our blog.