Mono Lake – Toto, I don’t think we are in Kansas any more

I have a tendency to overuse “other worldly” in describing places that are different, or spooky, or look like I could be on another planet. In this case – I stand by this description. But I am a little ahead of myself.  Our first view of Mono Lake was from high above the valley.  Coming from Lassen Volcanic National Park, we took back roads to see previously untraveled territory.

Love the stickers – Anyone loose a shoe?

View of Mono Lake from up high

Approaching Mono from the North, we entered the Mono Basin National Forest Scenic Area at Lee Vining.  The Visitors Center is a good place to start.  They have interactive displays as well as an informative 20 minute introductory film.

Yet in as little as 40 years, mankind has done possibly irreversible damage.

In 1941, the Los Angeles Department of Water and Power (DWP), in an effort to meet the growing needs of Los Angeles, started diverting water from streams that normally fed Mono Lake.  As the water levels fell, the water salinity changed drastically.  Now almost 2.5 times as salty as the ocean, the fragile natural balance was changed.

In the past, this was a major stopping place for migratory birds, as well as an important breeding ground for others.  By 1995, the lake level had dropped by over 40 vertical feet.  Although still home to many birds, some varieties have either disappeared, or gone elsewhere.  A noteworthy example:

In an effort to protect the wildlife and save the lake, in 1978, David Gaines formed the Mono Lake Committee.  Through their work, they managed to get legislation passed that is working toward restoring the lake to a healthier level.

With the high salt content, fish do not live in the lake.  It is however ablaze with two tasty morsels for the birds – Alkali Flies and Brine Shrimp.

But in all honesty, I did not come here to see the flies, tiny brine shrimp or to count the birds (surprise, surprise). I came here to take pictures of the rocklike structures jutting out of the water.  The best place to see them close to the shore is at the south end of the lake, at “South Tufa”.

Tufa is the name of the rock, which is essentially common Limestone.

What is unusual however is the way it is formed here.  In simple terms, underwater springs rich in calcium mixed with the high levels of carbonate in the lake water causing a chemical reaction – calcium carbonate or limestone.  Normally these formations would be underwater, but with the dramatic change in the water level, many are now right at the shoreline.

There is a $3.00 charge at the parking lot at South Tufa, but I am making great use of my National Park Lifetime Senior Pass.  Just FYI – this is a wonderful perk for anyone 62+.  At a one time charge of only $10, you get unlimited access to all of our National Parks and it never expires.  Having already used my pass at Lassen NP, we got in here essentially for free.

And here is a sampling of the pictures Tim and I took.  My favorite is actually the one I choose for the header on this page. 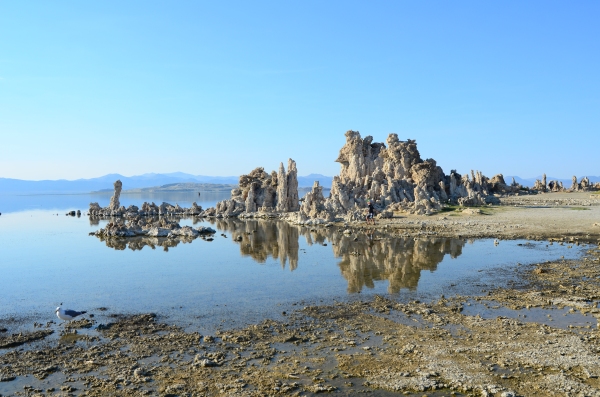 Mono Lake through my eyes

Tim in front of Tufa

And one final shot…

Tim and Joanne at Mono Lake

Have you been to Mono Lake?  Are there any other places you would consider “other worldly”?