We got up and out fairly early for us, wanting to get up into Zion before noon in hopes of getting a spot in the South Campground right inside the park. They do not take reservations, and we knew the odds were not in our favor. After a phone call where I found out that the park usually fills up between 9:00 a.m. and noon, I was even more concerned.

Traveling up from the North Rim of the Grand Canyon, then turning off of Hwy 89 onto Utah 9, just before the entrance to Zion, we spotted a campground called Hi-Road and decided to check it out. They had three spots left and we took one. Turned out to be a very good decision, as by the time we actually got to the campground inside Zion, it was completely filled.

Unhooking Jethro, our Subaru tow vehicle, we made our way toward the South Entrance.

Human habitation within this area dates back 8000 years with Native American groups including the Basketmaker Anasazi, the Virgin Anasazi, Parowan Fremont, Parrusits and other Southern Paiute subtribes.

Along the side of the road, several cars were parked with people gawking at a small herd of Desert Bighorn Sheep. 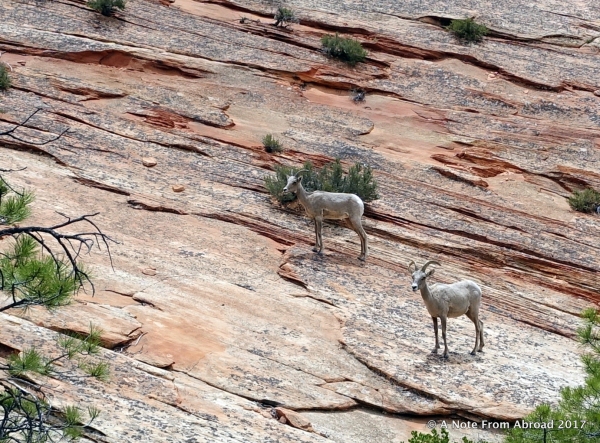 Desert Bighorn Sheep cling to the side of a steep mountainside

There is a 1.1 mile long Zion-Mt Carmel Highway Tunnel that was blasted through the mountain, quite a feat back in 1927-1930. There are size restrictions and even our small Ellie Mae would have been subjected to an additional $15 fee to pay for the one-way traffic control service. Click here for the size restrictions and other frequently asked questions.

While we were stopped waiting for an RV to come through the tunnel, a lone bike rider was stopped by the side of the road as well. We found out that you can not ride a bike through the tunnel for safety reasons. He was stuck for the moment and asked us if we would be willing to give him a ride through the tunnel. We gladly helped out, lowered down one of our back seats in the Subaru, put the bike in, he jumped into the other seat and off we went. He races bikes and was in training. Wish I had gotten his name…

Zion National Park covers 229 square miles, but the main attraction is the 15 mile long Zion Canyon which was cut by the Virgin River. During much of the year, the Zion Canyon Scenic Drive portion of the canyon is only accessible by park shuttle bus.

Tim and I visited both Zion and Bryce NP about ten years ago with our friends, Laura and Michael, so this was a second time for us. We wanted to get a refresher, returning to our favorite section. This meant taking the shuttle bus from the Visitors Center to the end of the line at the Temple of Sinawava.

At this stop you can take the one mile hike (two miles round trip) along the Virgin River to the entrance of The Narrows.

The pathway is mostly paved and accessible for wheelchairs if one has some occasional assistance, baby strollers and toddlers were seen along the way, as well as a very pregnant woman. 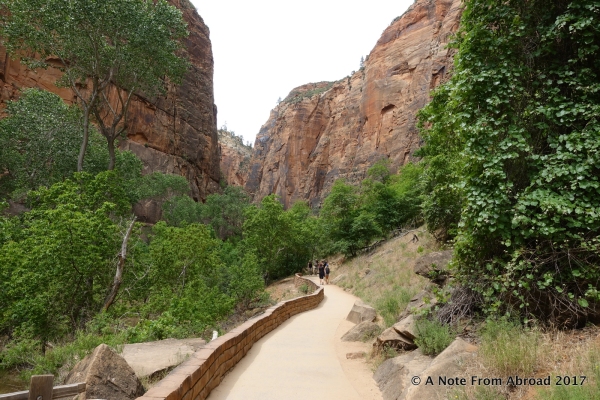 The weather was a scorching 97 degrees, and the breeze along the water and respite under the shade trees was very welcoming.

We were greeted by many squirrels, hopeful for a snack, but there are many signs along the way forbidding feeding any of the critters with a brisk $100 fine if caught.

Even the squirrels appreciated resting in the shade

Water dripped down the side of the cliff and both ferns and flowers clung for life. 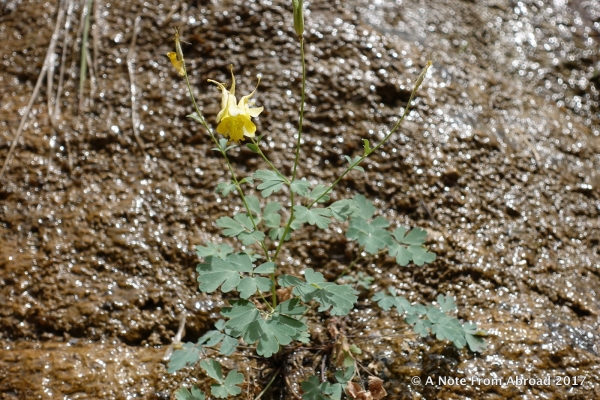 A young Mule Deer Doe grazed along the side of the pathway, seemingly calm and unperturbed by our intrusion of her mealtime.

Mule Deer – take a look at the size of those ears

As we approached the entrance to The Narrows, the pathway ends with a few steps down to the river. To continue further upstream requires wading through the water.

Steady stream of people going tp and coming from The Narrows

Having just had an amazing time at Antelope Canyon, we had no need to go wading into the slot, but Tim did cool off his feet for a few minutes.

Tim cooling off his feet in the Virgin River

We enjoyed people watching for a while before strolling the one mile back to the shuttle bus.

Tim and Joanne cooling off at the river’s edge

**Warning signs were reminders to not enter The Narrows during rain or if it had been raining upstream, as if it flooded you could become trapped and/or drown.

As a last-minute decision, we hopped off at the Zion Human History Museum and watched the 22 minute movie about the history of the park.

Back at the Visitors Center we loaded back in our car and headed back toward the south entrance.

On the drive between the Visitors Center and the South Exit

In all honesty, the drive between the Visitors Center and the entrance/exit is by far my favorite part of the park. I think it is much prettier, and more impressive than the canyon floor with the HUGE rock formations and towering red cliffs.

Here are some pictures I took along the way to try to give you a small sampling of what this incredible drive is like. 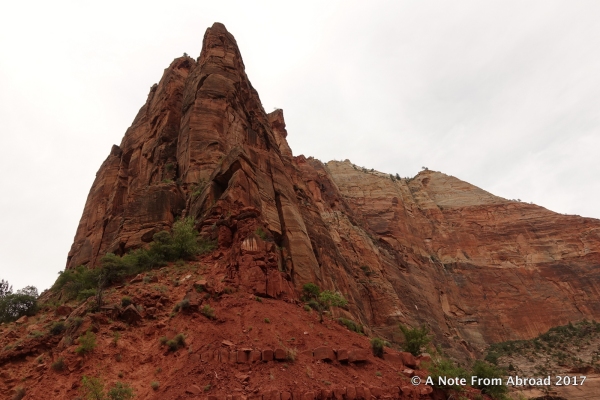 Narrow opening between the stone walls 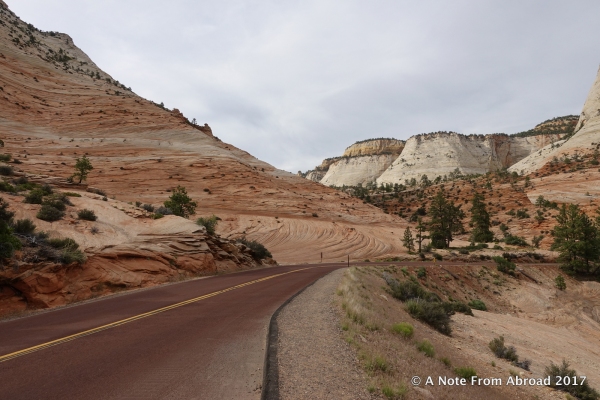 Back settled in with Ellie Mae where we dish up a welcome hot meal from the pressure cooker. I loaded it up with chicken pieces, onion, garlic, potatoes, and lots of herbs and used the slow cooker function letting it simmer all afternoon.

So nice to come “home” to a hot meal…

Not too shabby for camping 🙂

GRATITUDE MOMENT: Today I am grateful for the opportunity to relive fond memories of our visit with our dear friends years ago.