Tombstone, Arizona ~ The wild west comes to life for us

A bit of a combination of tourist attraction and living museum, Tombstone certainly fills you up with facts and fiction about the wild, wild west. The town was inhabited with miners, cattlemen, gamblers, heavy drinkers, gunslingers, cattle thieves, a few lawmen, four churches, 110 saloons, and 2500-4000 prostitutes.

We lost a day due to heavy rains, and did not want to be further obstructed today, so we braved the cold and took off walking the few blocks from our RV park into town.

The town was founded in 1879 by miner Ed Schieffelin, who was told he was nuts to be roaming around the Indian territory by himself looking for silver. They warned him that all he would find was his tombstone. So when he did find his silver ore, and staked his claim, he named it Tombstone.

First stop was at the old court-house, which today is a museum and well worth the stop. I was especially interested in reading about some of the characters who initially settled this area including bigger-than-life names like Doc Holiday, Bat Masterson, Johnny Ringo and Wyatt Earp.

They say that Doc Holiday was trained as a dentist, but that he pulled more triggers than teeth.

Henry Clay Hooker made his mark when he purchased 500 turkeys in California for $1.50 each and then HERDING them across Nevada and into the gold fields where he sold them to the hungry miners for $5.00 each.

Can you envision someone “herding” turkeys???? 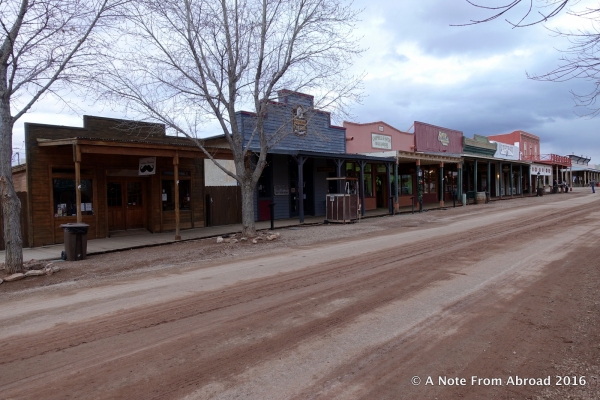 This is the main street of Tombstone

Allen Street, the main street through town, could have been a back-lot hollywood set, but it is the real deal with most of the town looking just like it did back in 1881 when the silver mining boom hit.

Our day was filled to the brim with activities that ranged from seeing the shootout at the OK Corral, watched a show at the Tombstone Histogram, having lunch at Big Nose Kate’s Saloon, taking a Trolley Tour, tramping around the Boothill Grave Yard, seeing the world’s largest rose tree, watching another gunfight at the Old Tombstone Western Town, checking out the Crystal Palace Saloon and then topping off the day with a Ghost Tour at the Historic Bird Cage Theatre.

Prostitution was legal here in Tombstone. The girls were licensed and had medical exams every coupe of weeks. The tiny shacks that they used to service their customers were called “cribs” and the “ladies” could have as many as 80 fellas visit in one evening!

I purchased a book today called “Soiled Doves” (what the prostitutes were called) about their life and business in Tombstone. I think it will be mind-boggling to read…

Shootout at the OK Corral

Confrontation in the street

Our rather short visit to Boothill Graveyard was a highlight. There is a descriptive list of the more than 250 graves that you can purchase for $3.00. It reads like an old movie script with descriptions like:

The pamphlet gives much more detail about many of those buried here and well worth the price. 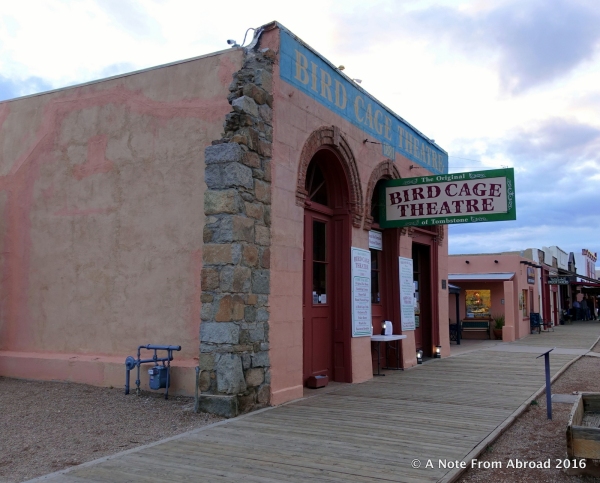 GRATITUDE MOMENT: Today I am grateful to have had the chance to step back in time to get a glimpse of what the wild, wild west was like. Learning a bit more about this colorful period in our countries history was fascinating.

Our next stop is in Bisbee. Hope you will join us 🙂

Hi and welcome! We are Tim and Joanne Joseph and we have just embarked on our "next chapter". At a stage in life where traveling the world, taking pictures, and sharing our adventures with friends and family will be our dream come true.
View all posts by Tim and Joanne Joseph →
This entry was posted in Arizona, Photography, RV Life, United States and tagged Arizona, Big Nose Kates, Boothill, Cemetery, Ellie Mae, Gun fight, OK Corral, Photography, Road Trip, RV, Tombstone, Travel, vacation. Bookmark the permalink.

53 Responses to Tombstone, Arizona ~ The wild west comes to life for us