Badlands National Park plus Wall Drug and a Minuteman Silo

In case you did not see what we did in the first part of the day, you can click here to find out. 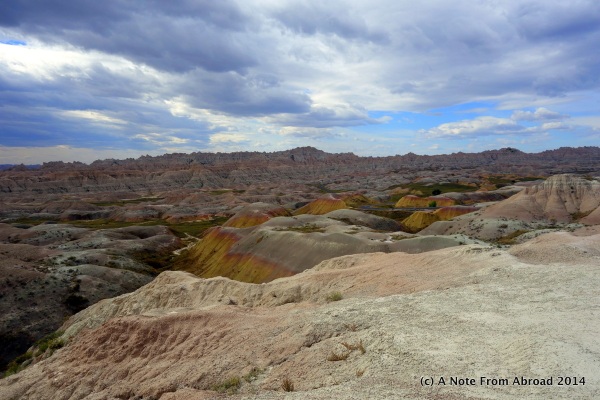 National Parks are magical places to visit. I’m planning on taking a map of the states, researching the parks, making a big X on the map for each one and connecting the dots. What a fun way to plan our future travels around the USA!

Entrance to the Badlands from the East

Badlands National Park is located in southwestern South Dakota. I think that the Wikipedia entry has better information about the history of the area including the prehistory, Native Americans, fossil hunters and homesteaders.

Tim and Joanne at Badlands NP

“These striking geologic deposits contain one of the world’s richest fossil beds. Ancient mammals such as the rhino, horse, and saber-toothed cat once roamed here. The park’s 244,000 acres protect an expanse of mixed-grass prairie where bison, bighorn sheep, prairie dogs, and black-footed ferrets live today.” ~ US National Park Service

Tim and Joanne at Badlands NP

Homesteading in the Badlands did not occur very much until the 1900’s when families migrated from Europe or the eastern half of the USA. Original homesteads were 160 acres, but the semi-arid climate combined with harsh winds made supporting a family too difficult. In 1916 the size of a homestead was increased to 640 acres. Even with the larger farms, few families were able to make it. 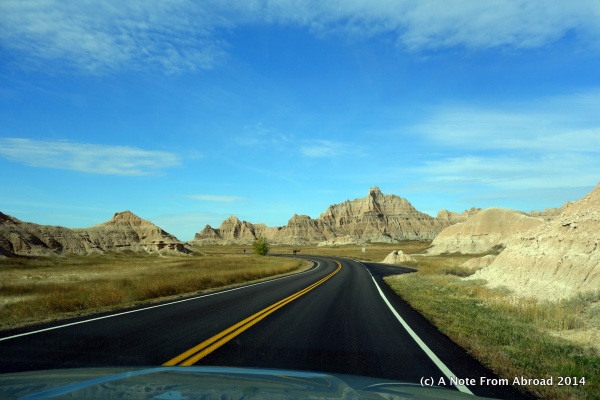 Driving through the park

“… the Great Dust Bowl events of the 1930s, combined with waves of grasshoppers, proved too much for most of the settlers of the Badlands. Houses, which had been built out of sod blocks and heated by buffalo chips, were abandoned. Those who remained today ranch and raise wheat.” ~ Wikipedia

Scrub brush is about all that is growing other than grass

The colors changed as we drove farther west, deeper shades of red, then eventually deep gold as we reached the oldest depths. The following pictures show how the terrain changed along our drive. 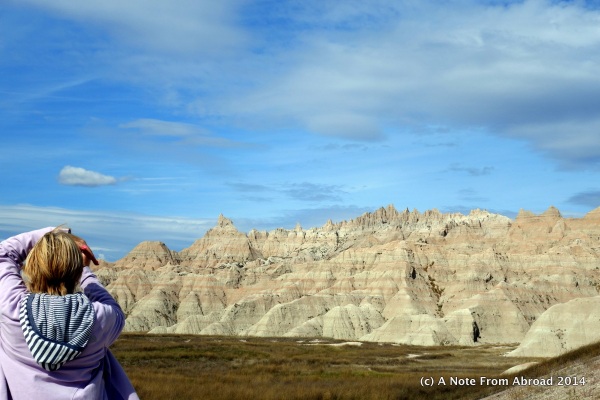 Red and brown stripes through the rocks 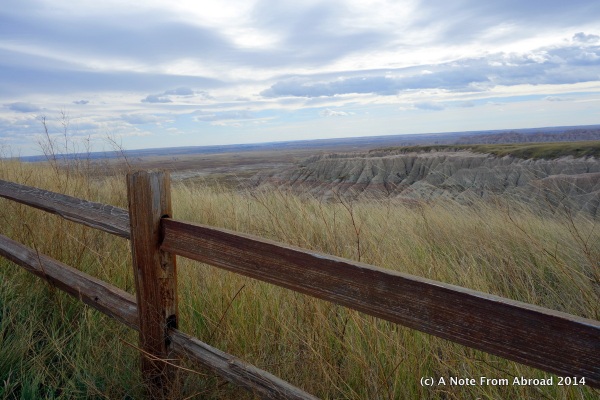 A fence and grasslands mark the prairie edge 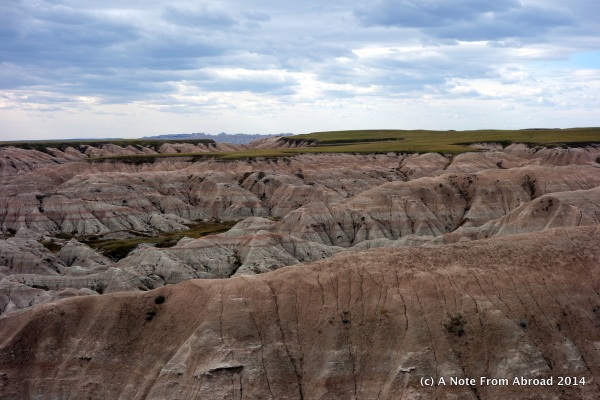 All of a sudden those Prairie dogs don’t look so cute. 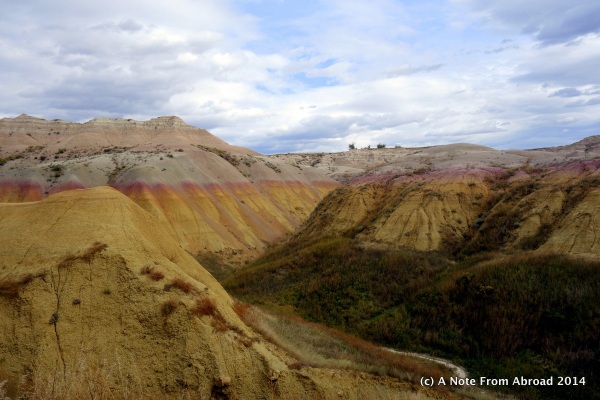 And then the brilliant pinks and golden rocks 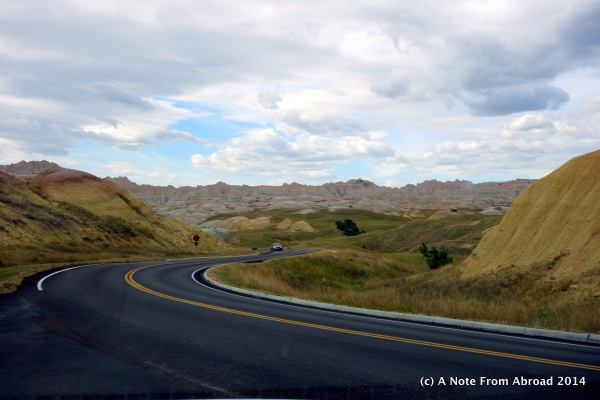 The road winds. Around each corner a new vista appears.

Inviting and harsh at the same time

On top of a plateau

Near the end of the park we happened upon a small herd of Bighorn sheep. A few wore banded collars, so they were being tracked.

Our day was not quite over yet. With all the signs touting Wall Drug we stopped in for an ice cream and a cup of coffee. It is a huge combination of stores all run by the one company. Pretty much a tourist trap, but hard to pass it up after seeing the billboards for the last 200 miles. I was told that the donuts are great! 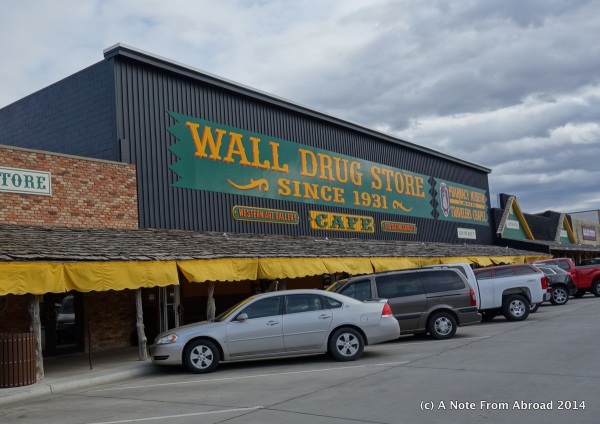 The Minuteman Missile site was just closing as we arrived, so we had only five minutes to take a quick look.  The silo is just six miles away from the town of Wall (where Wall Drug is located) along Interstate 90 at Exit 116.

“It consists of an underground launch tube (“missile silo”) 12 feet (3.7 m) in diameter and 80 feet (24.4 m) deep, made of reinforced concrete with a steel-plate liner. An unarmed missile is on display inside. The launch tube’s 90-ton cover has been rolled partly away and welded to the rails it rides on. The launch tube was then covered with a glass viewing enclosure.” ~ Wikipedia 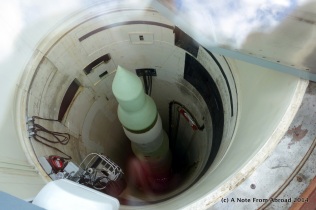 Gratitude Moment: Today I am grateful for a comfortable bed at the end of a long, long (but wonderful) day.

Hi and welcome! We are Tim and Joanne Joseph and we have just embarked on our "next chapter". At a stage in life where traveling the world, taking pictures, and sharing our adventures with friends and family will be our dream come true.
View all posts by Tim and Joanne Joseph →
This entry was posted in National Parks, South Dakota, United States and tagged Badlands, Homestead, Minuteman Silo, National Park, Photography, South Dakota, Travel, USA, vacation, Wall Drug. Bookmark the permalink.