I did not make notes while in Iceland. Our time there was limited and with two long excursions booked, I had little free time other than for meals and some sleep. I’ll reconstruct our time there mainly via the pictures we took with a brief explanation. We arrived at noon on our first day and would be overnighting with a 5:00 pm departure scheduled for the next day.

Our first tour was labeled Krysuvik Geothermal Field and Blue Lagoon. It was a 5 hour excursion and cost $89.75 USD per person.

What stood out immediately for me was that other than right in the main city of Reykjavik, which is the capital of the country, the rest of the land is quite barren and sparsely populated. We passed mile after mile of lava fields now partially covered over with green moss. In some areas there was decent red soil being cultivated with crops as well as used for range land for sheep, a few cows, and the pure bred Icelandic horses.

The weather was rainy, cold compared to Southern California, but 12 degrees Celsius is considered warm here.

Tim’s poor umbrella did not fare well in the wind and was quickly becoming rather worthless as it blew inside out and eventually some of the metal strands simply snapped. It ended up in the trash by the end of our second day here. I was thankful for my recently purchased rain jacket with an adjustable hood that kept me both dry and warm.

“Witness the powerful jets of steam escaping from deep below the earth’s crust and multicolored pools of boiling mud of the solfataras.” ~ **Royal Caribbean tour brochure

Having been to Yellowstone National Park in the states, we are very familiar with this type of geological phenomenon, however it does not get old. The multicolored landscape seems otherworldly. I find it to be incredibly beautiful, almost prehistoric.

Lone man on the hill

“Visit the Blue Lagoon, crowned by clouds of vapor and surrounded by lava” **

The Blue Lagoon is much larger than I had expected. Most people believe that this is a natural pool, and it is in a way, however it is in reality a manmade byproduct of the large geothermal plant right next door. Our excursion did not include getting in the pool and I regret not choosing one that offered that option. Over 400,000 visitors a year bathe in the therapeutic water. The entire 6 million litres of seawater renews itself every 40 hours. The average temperature is 38 C and the surrounding lava field is 800 years old.

The Blue Lagoon with thermal plant in the background

Tim and Joanne at the Blue Lagoon

Soaking in the hot thermal waters

For the most part the tour guides we have in each location are professional, well-educated about their area, and can manage to keep a crowd entertained, or at least informed for the duration of the trip. This was not the case with our guide today. She stumbled along, often with large pauses in her narration. Attempting to amuse us she told three jokes that at best elicited a few groans from the bus, but were more often met with silence broken only by a couple of pathetic sympathy chuckles.

Each joke would be followed up with her asking, “Did you get it?”

Just before arriving at the Blue Lagoon she mentioned that the waters were considered therapeutic and could help reduce symptoms or help with diseases such as psoriasis, however with her funny pronunciation it came out as,

The bus roared with laughter. This time we all GOT the joke except her…

Entrance to the Viking Museum

The Viking Museum told the story of Viking sea travels and how their journey to the New World, discovering what they named Vinland has now been documented centuries before Columbus arrived. 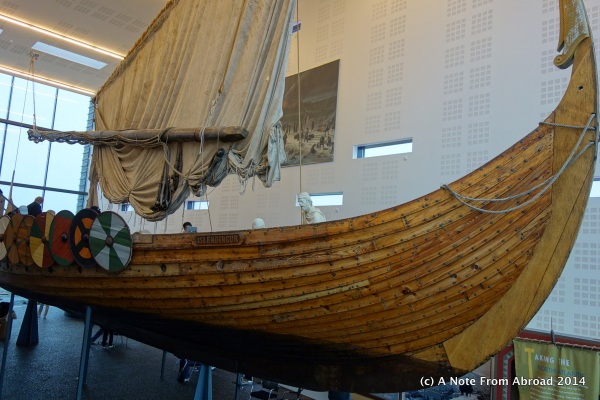 Inside the Viking boat 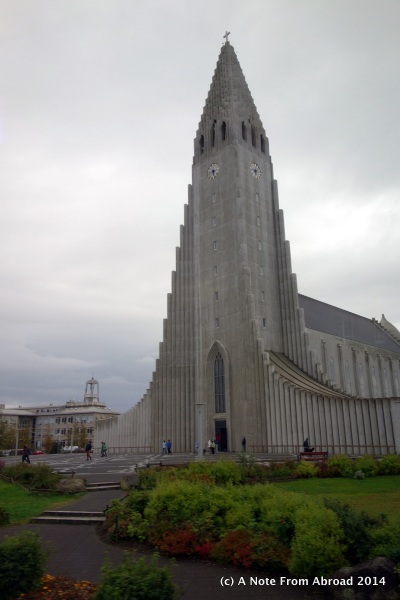 The evening tour that we booked to see the Aurora Borealis was cancelled due to poor weather. I know that Tim was disappointed as this is something he has wanted to see for some time now.

Gratitude Moment: Today I am grateful for waterproof clothing. I may not be stylish, but I have managed to stay warm, dry and comfortable with Jack Wolfskin jackets, REI pants, Smart Wool socks and sturdy Timberland boots.

Hi and welcome! We are Tim and Joanne Joseph and we have just embarked on our "next chapter". At a stage in life where traveling the world, taking pictures, and sharing our adventures with friends and family will be our dream come true.
View all posts by Tim and Joanne Joseph →
This entry was posted in Europe, Iceland and tagged Blue Lagoon, Brilliance of the Seas, Church, Cruise, Geothermal Fields, Geothermal Power, Hallgrimskirkja, Iceland, Krysuvik, Photography, Royal Caribbean, Royal Caribbean Cruise, Transatlantic, Travel, Viking Museum, Vikingaheimar. Bookmark the permalink.